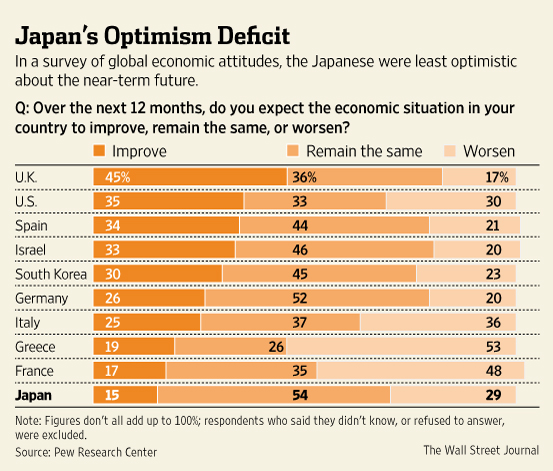 In a world plagued by the financial blues, the Japanese stand out for their particularly dour outlook, according to a new survey of global economic attitudes by the Pew Research Center.

That underscores the challenge facing policy makers trying to pull the country of its long slump, a campaign that rests as much on psychology — on erasing the “deflationary mindset” and persuading people things are getting better — as on hard economic data.

“Optimism about the economy over the next 12 months has nosedived in Japan, where just 15% foresee their economy improving, down from 40% who were hopeful a year ago,” the report says.

That makes the Japanese the least optimistic of the 44 countries surveyed by Pew, a particularly noteworthy nugget in a document titled “Global Public Downbeat about Economy: Many Wary of the Future.”  The Chinese bucked the trend, with 80% seeing a brighter year ahead. The U.S. was the most optimistic of the advanced economies, with 45% seeing improvement on the horizon.

Just above Japan on the grumpy scale: only 17% of French see things improving, 18% of Polish, and 19% of Greeks.

However, there are some important qualifiers to Japan’s downbeat diagnosis.

First, the Japan survey was taken between April 10 and April 27 — that is, shortly after the April 1 sales- tax hike took effect, a particularly low point in the public economic mood.  Other Japan-focused surveys have shown a sharp drop in consumer sentiment around then, and a rebound since. (The Pew survey, with 1,000 respondents, has a margin of error of 3.2%.)

Second, while the Pew poll shows Japanese lacking optimism, they’re not particularly pessimistic either. Just 29% said they expect conditions to worsen over the next year, a shade above the global median. The majority of the Japanese surveyed, 54%, said they expect their economic situation to remain the same in the next 12 months — the highest in the world to express that outlook.

By other measures, Japan’s gloom was on a par with most other advanced economies. About twice as many Japanese said they were dissatisfied than satisfied “with the way things are going,” and about twice as many said the current economic situation was “bad” as chose “good.” Those answers were roughly in the line with the U.S. and most of Europe. (Germans stand out among the advanced economies for their sunny perspective, with majorities there more “satisfied” than “dissatisfied,” and seeing things more good than bad.) 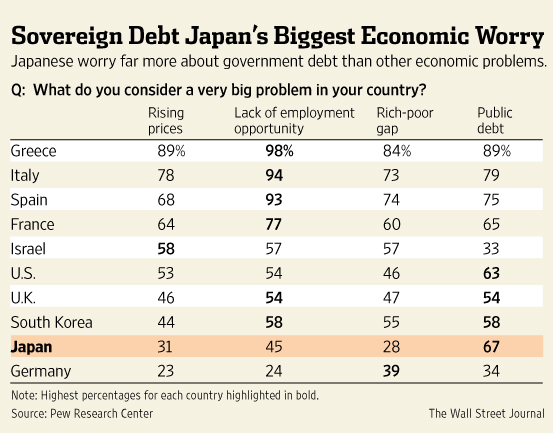 And by those benchmarks, the Japanese do seem to be feeling better than before. The percentage who say they are “satisfied,” and that the economic situation is “good,” have risen sharply in recent years, and are at their highest levels recorded since Pew started conducting its survey in 2002.

The Japanese also stand out in terms of the specific problems they say do, or don’t, plague their economy.  Relatively few see “rising prices,” “lack of employment opportunities,” or the “rich-poor gap” as “very big problems.”

Japan was the second-lowest among the 44 countries, just behind Germany, in terms of seeing inflation as a big problem — though that itself could be a problem for the Bank of Japan, which is trying to foster expectations of higher inflation. Japan was third-lowest in the world, behind Germany and China, on employment worries. The Japanese worried least among all countries about inequality.

The single-biggest economic concern identified by the Japanese: public debt, which at over 200% of GDP, is by far the largest among the countries surveyed. Two-thirds said it was a “very big problem,” though that was below 89% in Greece and 79% in Italy.

And that underscores the difficult balance for Japanese economic policy makers. While the public professes concern about the sovereign debt, the main step taken to fix it, the sales tax, has played a major role in undermining the economic optimism needed for a sustainable turnaround.