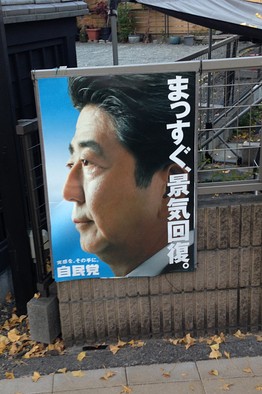 Virtually no forecaster expected the news Monday that the Japanese economy contracted over the summer, pushing the country into its third recession in four years. As the grim report’s implications sink in, the data is likely to reframe Japan’s economic debate, in a few ways.

Flipping the fiscal switch: from austerity to stimulus.

If there was any doubt before Monday that Prime Minister Shinzo Abe would delay the sales tax hike scheduled for next year, the awful data removed that uncertainty. But that’s just the start.

The third quarter jolt also leaves uncertain what remnants, if any, will remain of Japan’s strategy to curb its mammoth outsized sovereign debt, even over the medium-to-long term. As it became increasingly apparent in recent days that next year’s tax was imperiled, advocates at the finance ministry have been lobbying to keep some kind of fiscal discipline framework in place — perhaps a hard guarantee that the delayed tax increase would go into effect in 2017, no matter what.

It’s hard to see politicians tying their hands to any further sales tax hike in the future. It’s also hard to see Japan sticking to its pledge to balance its budget, excluding interest, by 2020 — or even a few years after that.

When the Bank of Japan shocked global markets just over two weeks ago with an unexpected fresh injection of money, Gov. Haruhiko Kuroda insisted he was being pre-emptive, getting out ahead of what he thought might be a looming drop in inflation expectations due to falling global oil prices.

Now he’s vulnerable to accusations that, as Mr. Honda put it, he’s “behind the curve.”

Mr. Kuroda’s model for hitting his 2% inflation target by next year assumes he can push Japanese growth above its “potential,” estimated at about 0.5% per year. At that pace, factories are operating beyond normal capacity and unemployment is falling — conditions that tend to push up wages and prices.

But a shrinking economy means the “output gap” is swelling again, instead reviving the old deflationary pressures Mr. Kuroda has been trying to quell. By the BOJ’s own models, that could require even more central bank liquidity.

Two years ago, Mr. Abe won a landslide election victory on a pledge to end deflation and Japan’s long slump. One of his first big moves was to put Mr. Kuroda in charge of the Bank of Japan, replacing a more cautious governor with one pledging to print vast amounts more money.

Markets and voters cheered, on hopes that the two men understood what ailed the economy and had the ability to fix it.

The unexpected July-September contraction adds to the growing questions about that faith. Less than two weeks ago, Mr. Kuroda said in a speech that “Japan’s economy has continued to recover moderately as a trend.” It now seems his assessment was off base, and the economy was much weaker.

There are also rising doubts about whether further monetary stimulus will really do much to lift Japan’s growth, or whether one immediate result — a weakening yen — is doing more harm than good, at least for some families and companies, by pushing import costs higher than growth in wages or profits.

And there’s spreading uncertainty over just how much power Messrs. Kuroda and Abe have to pursue more dramatic action, even if they concluded it would work. Mr. Kuroda’s last big stimulus expansion barely passed his own policy board, by a 5-to-4 vote, highlighting the doubts, even within the BOJ, about the wisdom of more action.

Mr. Abe seems likely, possibly as soon as Tuesday, to combine a tax-delay announcement with plans to dissolve parliament and hold elections Dec. 14, in hopes of winning fresh voter support for his Abenomics program. But the bad data has emboldened the opposition in its attacks on his record, and his ruling party is expected to lose seats. If so, he could emerge weakened, with even less power to push through whatever ideas he might have to boost growth.