An annual demographics report out this week from the Ministry of Health, Labor and Welfare gives a good picture of Japan’s population problem. Here are the highlights in five charts:

Taking immigration into account, the total population in 2013 declined by 217,000 people compared to the previous year. Assuming the average woman has 1.35 children—a bit below the current level—Japan’s population is predicted to shrink to 99.1 million in 2048 and 86.7 million in 2060, according to a report by the National Institute of Population and Social Security Research. That’s down from 127 million currently. 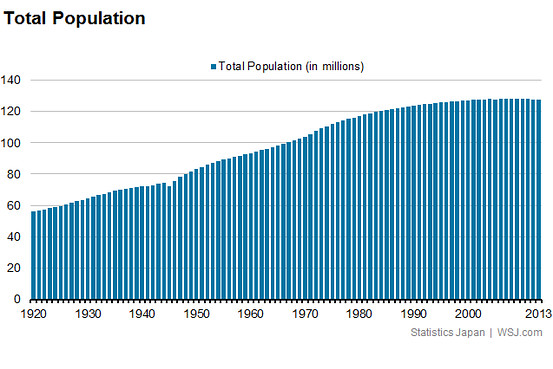 The biggest cause of death was cancer at 28.8%, followed by cardiac disease at 15.5% and pneumonia at 9.7%. Cancer has been the top cause of death since 1981 and has continued to increase. For the age group 15-29, the death rate for males was more than twice of that for females, and the predominant cause of death for both genders was suicide. 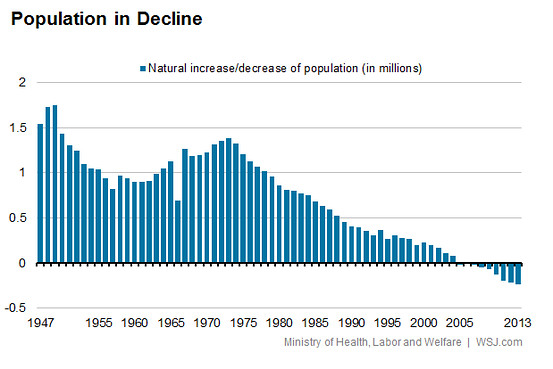 The number of births has been on the decline since the end of the second baby boom in 1973. 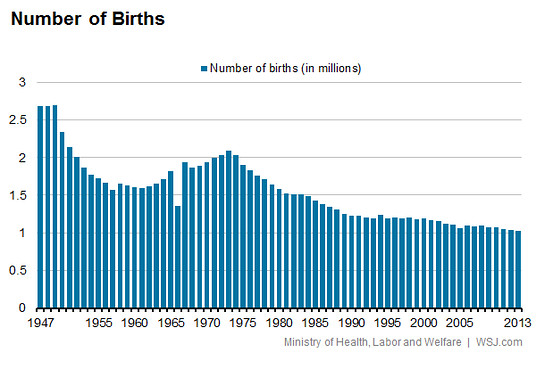 Women are having slightly more children but still well below replacement rate.

The total fertility rate in 2013 was 1.43, a 0.02-point increase from 2012. The figure represents the number of children an average woman will bear in a lifetime based on fertility data from a given year. The total fertility rate has been gradually rising since hitting a record low of 1.26 in 2005, but is still from the level—slightly above 2.0—needed to keep population steady over the long term. 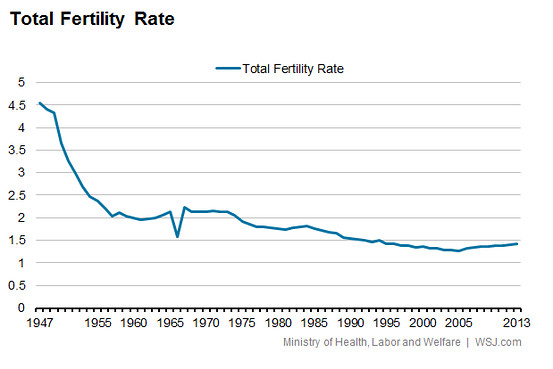 Fewer couples are getting married.

In 2013, 661,594 couples got married, a postwar low. The average age at the first marriage was 29.3 years old for women, three years older than the average two decades ago. The average age for a woman to have her first child was 30.4 years old in 2013, and that figure is also rising.

The Ministry of Health, Labor and Welfare said one reason for the trend is the difficulty women have balancing career advancement and family. Prime Minister Shinzo Abe’s government has proposed more support for working mothers, but the budget for supporting families with children is barely 1% of GDP for Japan, while it is over 3% of GDP in England and Sweden. 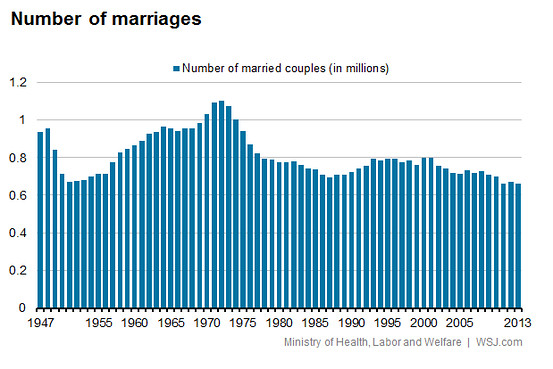