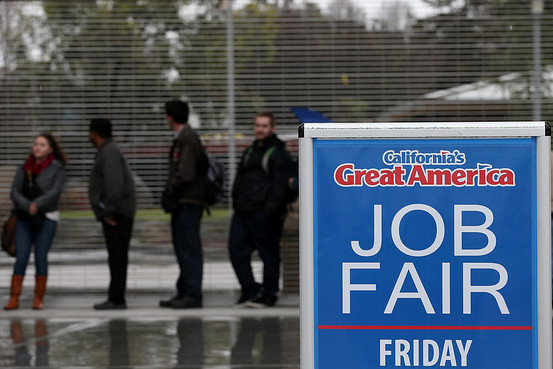 Job seekers wait in line to register for a job fair in California. But many people find jobs without ever reporting actively looking, say researchers at the San Francisco Fed.
Getty Images

In America, you don’t hunt for the job, the job hunts for you.

A new report from the Federal Reserve Bank of San Francisco said that most people who get a new job weren’t seeking it. Instead, recruitment and referrals form the basis of the bulk of new hiring.

“Many people find jobs without ever reporting actively looking for one. This implies that, rather than them finding jobs, the jobs actually find them,” write Carlos Carrillo-Tudela, Bart Hobijn, Patryk Perkowski and Ludo Visschers.

The report suggest there’s great uncertainty and a lack of knowledge about the underlying state of hiring in the U.S. economy. It offers more evidence of the extremely complicated nature of job market hiring dynamics.

The authors do not address changes in total employment, but do suggest some of the measures used to determine how many jobs are available, and how many people want them, may not very helpful.

The researcher’s findings are primarily based on a periodic government survey conducted by the Census Bureau called the Contingent Worker Survey, which reports on job search behavior. Problematically, the survey is infrequent. The most recent data are for 2005. It’s unclear whether changes in the job market since the Great Recession would affect the report’s conclusions.

But you go to war with the army you have, not the one you want. The researchers observed that in the data, “roughly three-quarters of job switchers did not report having looked for a new job,” adding “workers who switched jobs seem to have been actively sought out and recruited by their new employers.”

Put another way, applying to want ads may be futile, and the report says that applies to job searchers with and without jobs. “The bulk of job-to-job transitions does not adhere to the usual interpretation of the labor market matching process in which employees actively seek out job openings posted by employers,” the authors said.

So how are people getting jobs? Referrals or direct contacts by firms looking to hire, the researchers wrote. “Poaching,” or firms raiding one another for workers to do similar jobs, also appears to be important in getting new work.

Sometimes, the companies doing the hiring didn’t even know they wanted to, given that many new hires go into positions that were never made public to begin with. The San Francisco Fed report cites existing research that shows 42% of hires happen at firms that didn’t report vacancies.

U.S. CEOs See an Improving Economy But Will Hold Steady on Hiring

Job Openings Rise to the Highest Level in 14 Years

Skills Shortage Is the Worst Since 2006, Small-Business Survey Says