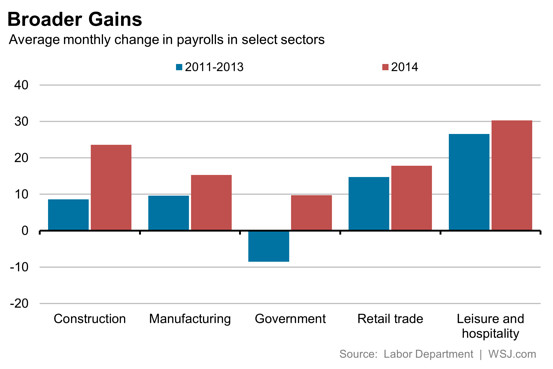 Employers this year are adding to payrolls at the best clip of the recovery, 230,000 a month, and with that acceleration comes better hiring in typically higher-paying fields such as construction, manufacturing and the government.

Construction payrolls have grown, on average, by 23,500 a month in 2014, according to the Labor Department‘s jobs report released Friday. That’s a jump from the average monthly gain of just 8,600 the prior three years. Manufacturers have added 15,000 jobs each month this year, compared with just under 10,000 the prior three years. And after mostly shedding jobs in recent years, the public sector has averaged nearly 10,000 workers added each month in 2014.

Lower paying fields, such as retail and hospitality (including restaurants), are still aiding overall growth, but the acceleration in those sectors has been less dramatic this year. The retail industry is hiring about 18,000 per month this year—a smaller monthly gain than construction. The retail monthly average is up a bit from 15,000 during prior three years. Hospitality has added 30,000 a month in 2014, versus 26,500 from 2011 through 2013.

Those higher-wage jobs are digging out of deep holes. 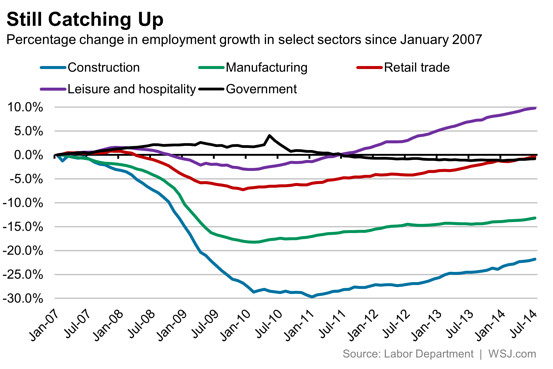 Employment in construction remains down more than 20% since January 2007, before the recession began. The dramatic fall in part shows that the home- and commercial-building sectors were overheated leading into the recession, but also underscores a major employment deficit.

Employment in manufacturing is down 13% since the start of 2007. It’s likely that some of those jobs will never return because U.S. factories have become leaner and more efficient. Government payrolls are virtually flat since the recession began, but have declined since 2011. Early in the recovery, federal stimulus dollars and Census hiring helped prop up public-sector employment.

Meanwhile, the hospitality field’s employment is up nearly 10% from the start of 2007, while retailers have more than replaced every job lost in that sector during the recession.