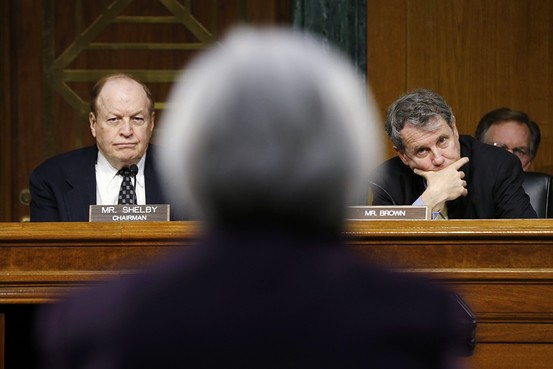 The 2010 Dodd-Frank law expanded Fed oversight of big banks and tasked it with monitoring financial stability. But Congress didn’t examine whether the Fed was “correctly structured” to account for its new authority, Mr. Shelby said.

“As part of this effort, we will review proposals aimed at providing greater clarity in Fed decision-making and at reforming the composition of Federal Reserve System,” he said at the committee’s first hearing on Fed “reforms” since Republicans took control of the upper chamber in January. Mr. Shelby said he had asked for input from the Fed’s regional reserve bank presidents.

“Some changes would require legislation, but some would not,” he added.

The comments come as several proposals for restructuring the Fed are gaining attention on Capitol Hill.

Sen. Jack Reed (D., R.I.) reintroduced a measure last month that would require the president to nominate and the Senate to confirm the president of the Federal Reserve Bank of New York. Mr. Reed unveiled the bill late last year amid criticism that the New York Fed wasn’t doing a good enough job policing Wall Street. The lawmaker argued that the unique and powerful position required greater scrutiny from Congress and the public.

Federal Reserve Bank of Dallas President Richard Fisher has proposed shifting power away from the New York Fed to other regional banks. He also suggested changing the current rotation pattern of the bank presidents as voting members of the Fed’s policy making Federal Open Market Committee.

Mr. Fisher’s plan earned an important endorsement from the Independent Community Bankers of America, which called on the Senate to adopt the changes.