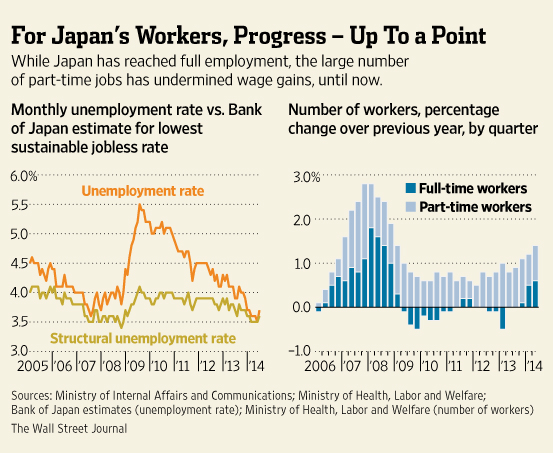 “A ‘visible hand,’ is necessary” in particular to prod companies to lift worker pay, a crucial element for sustainable growth, the Bank of Japan governor declared in a weekend speech at the Federal Reserve’s annual Jackson Hole, Wyo. symposium.

Mr. Kuroda certainly isn’t the first central banker to discuss alternatives to Adam Smith’s “invisible hand” of the free market. During the emergency response to the 2008 financial crisis, the Fed and others smashed any number of taboos.

Still, the BOJ chief’s creative diagnoses and prescriptions bear close watching. Japan is the only major modern economy to have crossed through the looking glass from stagnation to persistent deflation, and he is currently writing the rulebook for how – or, depending on things turn out, how not — to make the journey back. It’s a guide others may soon need.

Europe is flirting with a similar fate. As Fed Chairwoman Janet Yellen discussed in a separate Jackson Hole speech, the U.S., even amid growing signs of recovery, is still puzzling over the mysteries of how good jobs and good wages remain elusive.

In conventional “invisible hand” logic, prices are dictated by supply and demand. In the labor market, that means falling unemployment should force companies to raise wages to secure workers as they become more scarce. In the U.S., Ms. Yellen is focused on maintaining an easy monetary policy to reduce the persistent “slack” in the job market, on the assumption that once the slack disappears, wages will then naturally rise.

In Japan, markets appear to be operating differently. As growth and hiring have picked up during the first year of Mr. Kuroda’s stimulus program, the slack has dried up.

Unemployment over the past year has fallen to the BOJ’s estimate of full employment, as the top graph shows.

“However, this does not mean that all is well and there are no concerns regarding Japan’s labor market,” Mr. Kuroda said, launching into an explanation of “Japan’s experience concerning changes in the labor market brought about by the protracted deflation.”

The gist: a “deflationary sentiment” of pessimism and cost-cutting took hold. Companies have continued to sit on large piles of cash, even after paying down their debts, in anticipation of ongoing gloom.

That excessively cautious predilection for cost-saving has filtered into the labor market in two ways. Companies, even when hiring, tend to hire lower-paid part-time workers who also are more easily laid off. The bottom graph shows that trend has continued over the past year — though the last data point shows an encouraging  pick-up in full-time hiring as well.

“A more troublesome problem is that wage-setting practices have changed during the prolonged period of deflation,” Mr. Kuroda said. In particular, the annual spring labor negotiations between labor and management broke down as a channel for pushing up pay. Pay did rise in the negotiations earlier this year, and, by at least one measure, at the fastest pace in four years.

That followed an unusual public plea by Prime Minister Shinzo Abe to corporate chief executives to lift pay, one version of the “visible hand.” But the rate of increase has fallen short of the rise in inflation and tax increases, leaving workers, on balance, worse off.

Enter the “visible hand” of the BOJ. “For wages to increase at an appropriate pace in the future, it is necessary to have some kind of coordination mechanism” to break old deflationary habits, Mr. Kuroda said.

And he suggests the Bank of Japan’s 2% inflation target become that “visible hand,” the benchmark framing labor negotiations. Management and unions should set wages around the assumption that the BOJ meets its target, which, of course, would in turn make it easier for the BOJ to hit that target in a sustainable manner.

That follows the broader role Mr. Kuroda has often articulated for the central bank — not just pumping money into the economy, or targeting inflation, but creating the conditions for broader economic changes needed to clear out the deflationary detritus clogging the market’s machinery.

If the BOJ can help ease deflation, “companies would be more innovative” and take more risks, he said in a May Wall Street Journal interview.