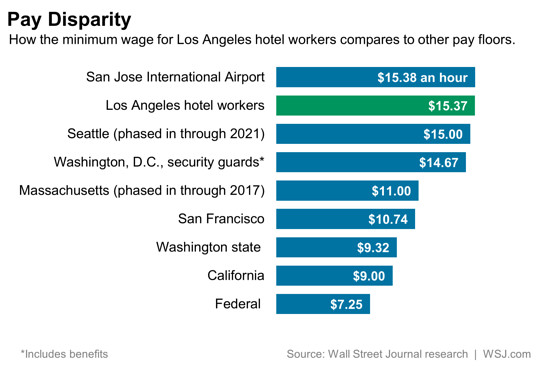 Housekeepers, bellhops and other Los Angeles hotel workers are set to be paid more per hour than the majority of workers in 15 states, including Florida, South Dakota and Mississippi.

The Los Angeles City Council approved a measure Wednesday to lift the minimum wage for workers at large hotels to $15.37 an hour. If the council and mayor give final approval, as expected, the starting pay for hotel workers in the city will exceed the median hourly wage paid last year in almost a third of states.

In Florida last year, for example, half of all workers whose hourly rate could be calculated were paid $14.74 an hour or less, according to the Labor Department. In Mississippi, the state with the lowest median wage, the typical police officer, fire fighter and auto mechanic earned less per hour last year than Los Angeles hotel workers are expected to be paid.

The disparity could widen further as cities and states in typically higher-cost areas, including California, Hawaii and New Jersey, have acted to raise the minimum wage. San Francisco and San Jose have raised local minimum wages even above the state level.

Meanwhile, states in the south and parts of the Midwest have stood pat, paying the federal floor of $7.25 an hour. The cost of living in California is 30% higher than in Mississippi, according to Commerce Department.