Labor Department: Bees Are the No. 1 Bug Killer of Workers – Real Time Economics 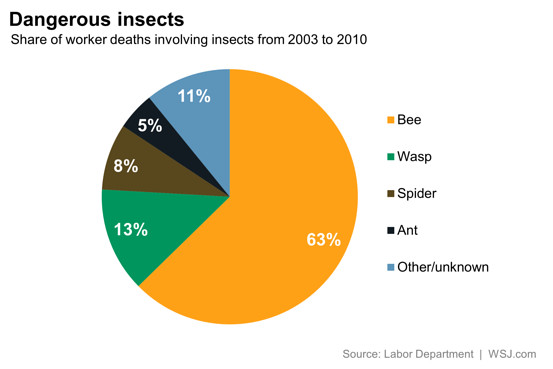 A new 16-page government report implies an important warning: Watch out for bees when working in Texas.

Of the 83 people to die on the job due to insect-related injuries from 2003 to 2010, 63% were killed by bees and one in four fatalities occurred in Texas. That’s according to a new Labor Department’s report, “Fatal injuries and nonfatal occupational injuries and illnesses involving insects, arachnids, and mites.”

Almost all the deaths were caused by the bugs’ stings, venomous bites or injections, but five fatalities were due to falls from a vehicle.

Texas, with 21 insect deaths over the eight-year span, far outpaced the next closest state, Florida, where eight workers lost their lives to insects. Forty states reported no deaths due to bugs.

While most deaths occurred in Texas, insect-related injuries were more numerous in California. In 2010, 750 cases were reported there followed by 620 in Texas and 610 in Georgia.

The bugs appeared to particularly target public-sector employees, though that could reflect stronger reporting requirements. Of all injuries reported, 35% were state and local government workers. Those employees account for about 14% of the U.S. workforce.

But after adjusting for population, New Mexico may be the most dangerous place for bug-fearing workers. In 2010, the most recent year for which there are data, it had 8.3 insect injuries of workers per 100,000 people living in the state, by far tops in the country in 2010. Georgia was next at 6.3 per 100,000. 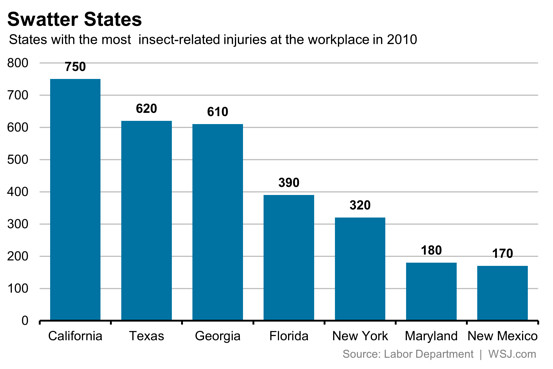