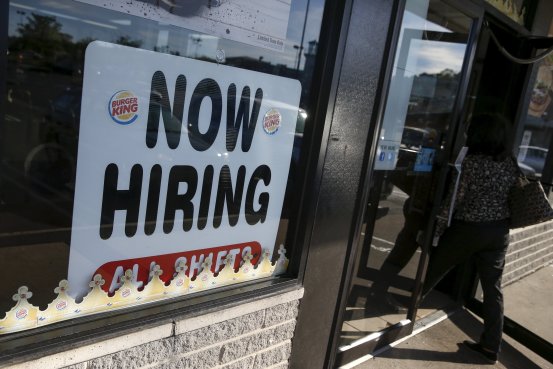 The data comes from the Labor Department’s monthly Job Openings and Labor Turnover Summary. In August the U.S. economy added 136,000 jobs  on net. The Jolts survey tracks the millions of movements behind that number as people quit one job and find new work, as they get laid off or as they retire. Economists closely follow for hints that the labor market could be gathering steam or slowing down. Today’s report provides little nudge in either direction. For much of the past year, the report has presented a conundrum, which remains after today’s report. The level of job openings has surged to record highs, but actual hiring into those jobs has lagged. July’s 5.7 million job openings was the highest in the history of the report, and more than 30% higher than its prerecession level. The level of job openings, by contrast, has recovered to its prerecession level but risen no higher. Yet the unemployment and underemployment rates suggest there should be plenty of candidates to fill these jobs.

“The core mystery is still why the number of openings is so high relative to the  unemployment rate and, more recently, the softening in payroll growth,” Ian Shepherdson, the chief economist of Pantheon Macroeconomics, said in a note. “We are leaning increasingly towards the idea that the key problem is that companies can’t find suitably qualified staff.”

The number of people voluntarily quitting a job—which economists generally regard as a positive behavior that indicates people feel they have better options—has yet to fully recover. Fed officials such as Chairwoman Janet Yellen have long indicated they would see more turnover, especially from more quitting, as a positive sign that the labor market has truly moved beyond the damage of the recession. Among people who do leave their jobs, a preponderance in recent years have done so voluntarily, according to these records. The September Jobs Report in 11 Charts

Myth or Fact? How Some Jobs-Report Analysis Goes Wrong