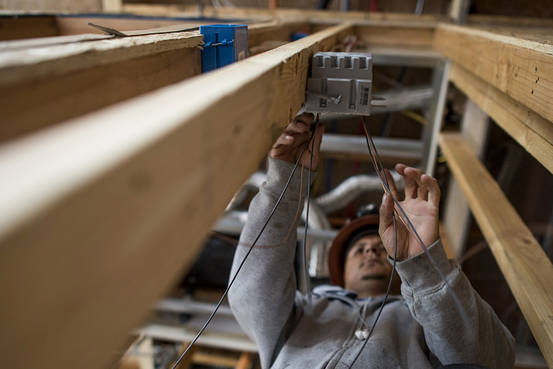 A contractor installs electrical wiring in a townhouse under construction at the Pulte Homes’s Pepper Lane development in San Jose, Calif., earlier this year. PulteGroup Inc. blamed its 6% decline in finalized sales in its third quarter primarily on a dearth of workers needed to finish homes on time.
DAVID PAUL MORRIS/BLOOMBERG

Construction-labor shortages are starting to dent the results of large home builders.

PulteGroup Inc., the third-largest U.S. builder by homes delivered, on Thursday blamed its 6% decline in finalized sales in its third quarter primarily on a dearth of workers needed to finish homes on time. Analysts had expected Pulte to register a gain in deliveries in comparison to its year-earlier result.

Also on Thursday, M/I Homes Inc., which operates in seven states, posted a 1% gain in deliveries when analysts expected a much more robust gain.

“In general, labor is the primary culprit of our lower conversion” of sales to closed deals, PulteGroup chief executive Richard Dugas said Thursday on a conference call with investors. “It’s clearly impacting our production. In general, we have to pay more for labor.”

While construction-labor shortages have dogged the home-building industry for much of the industry’s recovery, those deficits are becoming more acute this year as home buyers emboldened by a stronger economy are ordering more homes. Orders for new homes are up 21% in the first eight months of this year from the same period a year ago, notching the largest volumes since 2008.

Analysts and builders fret that the shortages will make it difficult for many builders to complete by the end of this year the homes that buyers ordered during the robust spring selling season. Builders typically book much of their profit in the fourth quarter when they complete construction of most of their homes and take payment.

“I think [labor shortages are] going to be a recurring theme,” said Thomas Lawler, an independent housing-market analyst based in Leesburg, Va. “But I don’t think you’ll see it for an extended period of time provided that underlying demand [for homes] remains OK and the builders are willing to pay more.”

Theories abound on why many U.S. construction workers left the industry during the downturn and haven’t returned. Some builders and contractors say the industry’s infrastructure for marketing itself to young workers and training them for construction careers needs reinvestment after being allowed to atrophy for many years. Others argue that change is needed to U.S. immigration policies to allow more foreign workers to legally work in the U.S.

Many posit that contractors and builders need to pay tradesmen such as carpenters, masons and tile setters more to lure them back to construction. They say a larger premium in pay is needed to get those workers to forgo more stable, less dangerous jobs to build homes. The National Association of Home Builders noted in a webcast to its members Wednesday that residential construction workers were paid, on average, 14% more than the overall U.S. average wage in 1990. By last year, that premium had shrunk to 4%.

“Wage rates in general have not been moving very fast for all types of work,” said David Crowe, chief economist for the builders association. “But the fact that they’ve lost some of their advantage in residential construction may be one of the reasons it’s hard to attract people back into the industry.”

“It is definitely widespread. There is no question about it,” he said on the call. “There is not a market in the country where we’re not experiencing some pressure.”

Here’s Where All the Construction Workers Went

Construction Workers ‘Left the Business and They Didn’t Come Back’