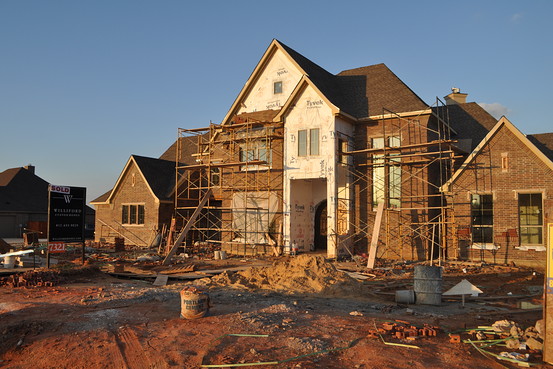 A home under construction near Fort Worth, Texas, this month.
Kris Hudson

Housing starts declined by 17% in February from January. So, we should all panic, right?

The Commerce Department’s data for February home starts, released Tuesday, is an anomaly born of harsh weather in many parts of the U.S. last month. Residential building permits provide a better view of the market’s trajectory.

The question isn’t so much whether this spring home-selling season is off to a disastrous start. Rather, it’s more about whether the spring is starting slowly or if it’s shaping up for big gains. The former would deliver modestly disappointing gains from last year’s lackluster result, and the latter is what most builders and economists are hoping for.

Consider that, even though overall construction starts were down 3.3% in February from a year earlier, residential building permits were up 2% in the same span. Permits are a solid gauge of building activity in the near future, and they aren’t whipsawed as much each month by weather as are construction starts.

From another perspective, the number of permits issued in January and February of this year for single-family houses shows a 0.9% increase from the same period a year ago. That’s not a strong gain. But neither is it the disastrous decline that today’s headline number implies. 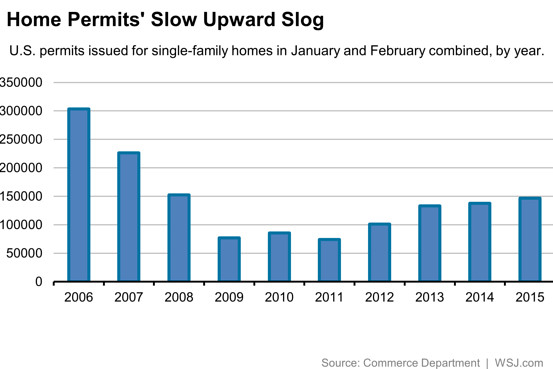 “We think harsh weather in the Northeast may have been partially responsible as that region fell the hardest sequentially and year-over-year in February (in permits for single-family homes),” Wells Fargo Securities analyst Adam Rudiger wrote in a note distributed to his firm’s clients Tuesday. “In contrast, the more important South and West regions were up 4.8% and 13.6% year over year, respectively, pointing to a stronger start to the 2015 spring selling season.”

The concern stemming from the February construction-starts data is that perhaps the new-home market remains stuck in first gear, unable to kick into the higher gears needed to contribute more to job growth and overall increases in gross domestic product. Economists are hoping for a big gain in home construction this year after 2014, with only a small gain, amounted to only 63.3% of the average annual output since 2000.

Several large, public home builders have reported sizeable gains in their January and February sales from their year-ago results, but it’s still a bit early in the season to know with certainty if the market will be hot or just room temperature.

Mark Zandi, chief economist at Moody’s Analytics, noted that February was a bad month for numerous economic indicators in addition to home-construction starts. His outlook remains positive. “There are nothing but tailwinds to the housing market now,” he said Tuesday in an interview. “So, I’d be surprised if we don’t see better conditions.”

At Century Communities Inc., sales across the builder’s four states of Colorado, Nevada, Texas and Georgia are better so far this year than a year ago, co-CEO Dale Francescon said in an interview. He said he saw no sustained impact on construction from harsh weather–at least not enough to throw off an entire month’s results.

Home-buyer “traffic continues to be better year over year,” Mr. Francescon said. “Builders have reported that the year has started off well, and we’re not seeing anything different from that. We’re still pretty optimistic about where this year is going to be, because it’s been a pretty good start.”