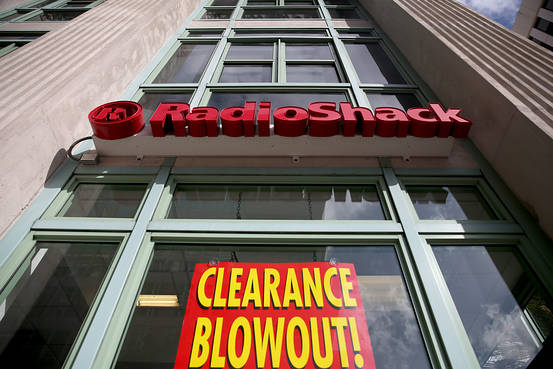 One reason for lower electronics sales is that websites and general-merchandise stores are stealing sales from traditional electronics purveyors such as Best Buy and the struggling Radio Shack. Another reason is that electronics are getting cheaper.
JOE RAEDLE/GETTY IMAGES

Americans spent more at retailers selling everything from cars to camping gear in July, but they spent less at electronics stores.

How can this be when gadget-head consumers are equipped with everything from Fitbits to Beats by Dre headphones?  One answer is that websites and general-merchandise stores are stealing sales from traditional electronics purveyors such as Best Buy and the struggling Radio Shack.

Another reason is that electronics are getting cheaper. 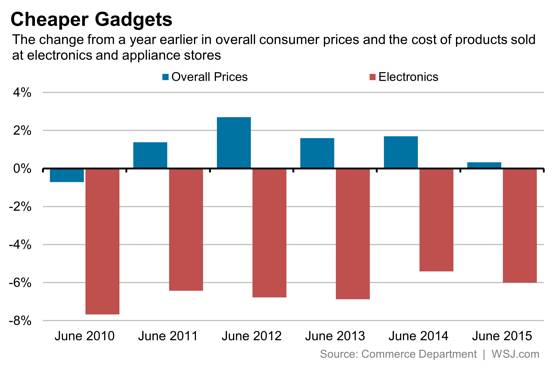 Sales at electronics and appliance stores fell 2.5% from a year earlier in July, according to the Commerce Department’s retail sales report released Thursday.

But adjusting for inflation, that’s not a bad result. The price of products sold at those stores was down 6% in June from a year earlier.

In fact, since the recession ended in mid-2009, the price of electronics is down 33%, by far the largest decrease of any category tracked by the Commerce Department. Overall prices are up almost 10% from six years ago, as measured by the personal-consumption expenditure price index.

The reasons for cheaper electronics are numerous. Technology tends to get cheaper over time, so one-time status symbols such as smartphones and flat-panel TVs are now everyday items. Some would also argue that it’s been a few years since a new must-have item such as the iPad has been rolled out. New innovations tend to be more expensive and prop up overall prices.

The global economy is likely also playing a role. Many electronics are produced overseas. As the dollar has gained strength against global currencies, that’s made foreign-made gadgets cheaper for American consumers.

In a Show of Confidence, Americans Boost Spending