Lower Gas Prices: How Big a Boost for the Economy? – Real Time Economics 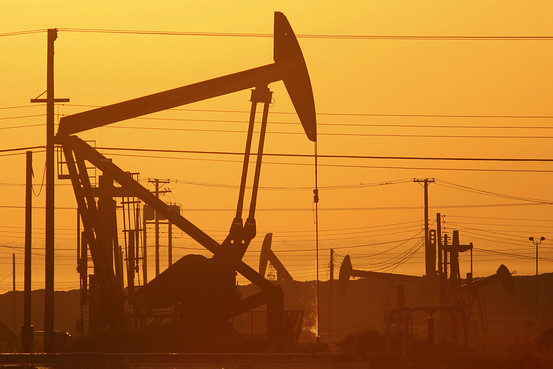 The surge in domestic oil production means that the drop in gas prices could crimp one of the hottest sectors of the U.S. economy. But lower gas prices are still good for America.
Getty Images

Oil prices have dropped below $70 a barrel in the U.S. after OPEC opted against cutting production levels last week in what some analysts view as a bid by Persian Gulf states to test the willingness of American shale-oil producers to keep drilling wells.

So what does this all mean for the U.S. economy? Lest there be any confusion, lower gas prices are still good for America. Prices of regular gasoline have fallen from $3.27 a gallon one year ago—and from a high of $3.68 in June—to around $2.77 on Monday, according to auto club AAA. That should provide a key boost at a time when growth abroad is faltering, even if lower prices curb investment in an expanding energy sector.

Here’s a look at how the gains and the losses add up:

Consumers: Consumers spent $370 billion on gasoline last year. With prices expected to fall around 20% from their average during the first half of the year, the drop in gas prices over the past six months amounts to a $75 billion tax cut for consumers, according to an analysis by Kris Dawsey, an economist at Goldman Sachs .

Lower gas prices also benefit most businesses because it reduces shipping and production costs. Goldman estimates that the total boost from lower gas prices should boost growth domestic product by 0.4 percentage points over the coming year.

One open question is to what extent will households spend, rather than save, their unexpected windfall from lower gas prices. Goldman’s forecast assumes that around half of the windfall is spent over the coming year.

A drop in gas prices could be a particularly progressive tax cut because lower-income households are particularly sensitive to increases in energy prices. Households earning less than $50,000 annually spent around 21% of their after-tax income on energy in 2012, up from 12% in 2001, according to analysts at Bank of America Merrill Lynch. Households earning more than $50,000 spent 9% of their after-tax income on energy, up from 5% in 2001. 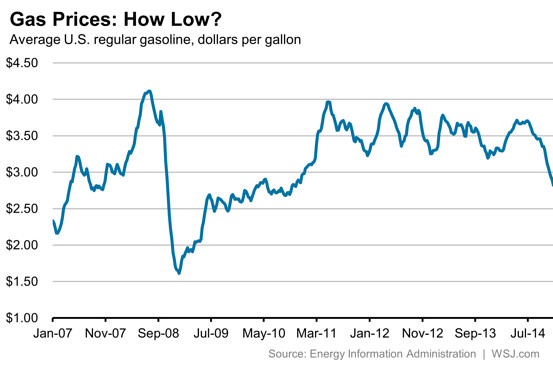 Energy producers: The surge in domestic oil production means that the drop in gas prices could crimp one of the hottest sectors of the U.S. economy over the past four years. One estimate shows that around 80% of new shale-oil wells will remain profitable with oil prices between $50 and $69 a barrel.

But even if existing wells remain profitable, energy companies are likely to reconsider their investment appetites given the potential for lower oil prices over the coming year. Goldman sees an energy investment headwind of around 0.1 percentage points from current levels.

Taken together, that means lower oil prices should boost growth by around 0.2 to 0.3 percentage points. A separate model maintained by the Federal Reserve Board shows that a 25% drop in oil prices would boost GDP by a smaller amount, between 0.1 and 0.2 percentage points during the first half of next year, according to Goldman.

Economists also note that the effects on both consumers and producers could take a while to show up in official data. On the energy investment side, for example, it takes time for investment decisions to ripple through the market. Capital spending cuts might not happen suddenly because producers tend to hedge against short-term price declines by selling oil in the futures market.

The benefits to consumers also accrue over time as drivers fill up their tanks. So far, lower gas prices have saved the average household around $80, according to ClearView Energy Partners. If prices were to stay at their current levels for a year, the savings could rise to around $340 a household.