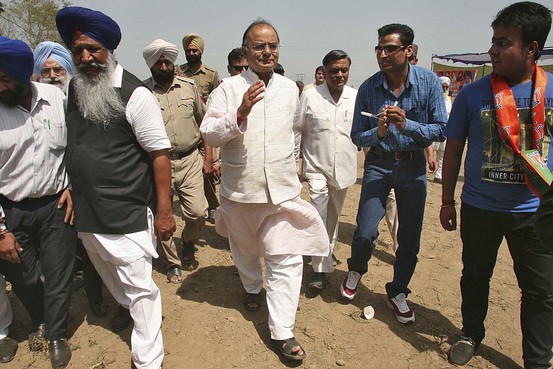 Meet the man who’s been handed one of the toughest jobs in India: reviving economic growth.

Arun Jaitley, 61 years old, is Prime Minister Narendra Modi’s nominee to run India’s Ministry of Finance. Mr. Jaitley, a lawyer, previously headed several ministries between 1999 and 2004–the last time his Bharatiya Janata Party led the national government. As a lawyer he has also represented PepsiCo and Coca-Cola in prominent cases in India.

He is considered a close ally of Mr. Modi. Over the years he has defended the BJP, and Mr. Modi, when controversies broke such as the allegations that Mr. Modi, as chief minister of the state of Gujarat, didn’t do enough in 2002 to stop religious rioting there that left thousands of people dead, mostly Muslims. Mr. Modi has said he did everything possible.

The Indian economy has slowed sharply the past few years as high inflation and policy gridlock hurt the prospects of Asia’s third-largest economy. Clashes over taxes also discouraged some foreign investors.

Although the challenges are big, the BJP has one advantage the previous government didn’t: It holds a clear majority in the powerful lower house of Parliament, which means it doesn’t need to cobble together a more fragile coalition government with other political parties. However, having a clear majority also means it’s harder to blame political gridlock for policy inaction or delays–adding pressure on the BJP to deliver results speedily.

In a recent interview with The Wall Street Journal while campaigning in Amritsar, Mr. Jaitley spoke about some of the economic challenges.

He  said a BJP government would try to signal that it is “easy to do business” in India.

A big challenge for Mr. Modi’s government will be to keep price inflation under control, a necessary condition to help keep interest rates low. The BJP has promised a number of steps, such as setting up of special courts to prosecute hoarders of essential commodities, mainly food, to keep prices under control.

Mr. Jaitley is viewed as a pro-business leader who initiated some major foreign-investment reforms during his short 17-month tenure as commerce minister in 2003 and 2004. In January 2004, he eased foreign-investment restrictions to allow foreign companies to fully own local ventures in key sectors such as oil exploration and oil- and natural-gas pipelines.

The government also allowed foreign investments in some segments of the media, which traditionally had restrictions on overseas ownership. The government allowed 100% foreign ownership in printing scientific and technical magazines.

Mr. Jaitley followed up, in March 2004, when his ministry announced that overseas investors would be permitted to own up to 74% of local banks, up from a previous 49%. It also allowed foreign banks the choice to operate in India either by setting up local subsidiaries or through branches. 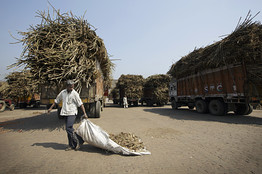 A worker drags a pile of sugarcane while trucks sit parked in a holding area in Uttar Pradesh, India.
Bloomberg News

Mr. Jaitley also was hailed for presenting India’s views forcefully at the World Trade Organization talks in the Cancun, Mexico, session in September 2003. His articulation of the need for less-developed economies to protect the interests of their farmers won him support from several other nations. At the session, India and other developing economies pressed developed countries, including the U.S. and those in the European Union, to cut subsidies to their farm sectors as well as for their exporters, saying they hurt the competitiveness of developing countries.

Mr. Jaitley efforts helped developing countries like China, Argentina, Brazil, South Africa and India, among others, to present a joint proposal at the WTO.

Mr. Jaitley also strengthened India’s bilateral trade relations with the U.S. “He warmed up relationship with United States substantially,” said D.K. Mittal, a retired bureaucrat who worked with Mr. Jaitley as a joint secretary in the ministry of commerce.

Mr. Jaitley also pressed for India to set up “special economic zones,” loosely modeled on similar zones in China, to boost manufacturing and exports. The policy was later implemented by the Congress-led government in 2005.

He also was the minister for law and justice when he promulgated the anti-defection law. That law penalized political factions that broke away from their parties, often leading to government instability. 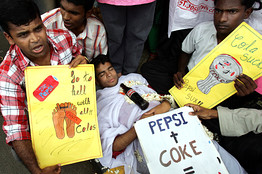 In this August 19, 2006 photo, an Indian student protester poses as dead with a bottle of Coca-Cola on his chest during a protest against the US soft-drink giants Coca-Cola and PepsiCo in Bangalore.
Agence France-Presse/Getty Images

As a lawyer, Mr. Jaitley defended global giants including Coca-Cola and PepsiCo. In 2002 (when Mr. Jaitley was no longer a government minister), he represented PepsiCo in India’s Supreme Court. The Court imposed fines on several companies, including Pepsi, for painting advertisements on trees and rock faces along the Manali-Rohtang road in the Himalayas.

In 2004, Mr. Jaitley appeared on behalf of Coca-Cola in a case at the Rajasthan High Court relating to disclosure of pesticide residue in beverages. The Rajasthan High Court ordered cola companies to issue disclosures on bottles that their beverages either didn’t contain pesticide residue, or that the pesticide level was within permissible limits. Coca-Cola maintained that all of its ingredients were within all safety limits.

In his brief, eight-month stint as minister for disinvestments–a ministry created following a WTO agreement to reduce government ownership in state-owned companies—starting in 1999, selloffs were much lower than anticipated. In the fiscal year ended March 31, 2000, the government managed to raise only about 18 billion rupees through the sales, far short of the 100-billion-rupee target that the government had set in the budget.

On top of that, two large sales planned by the government at the time were successfully challenged in the Supreme Court. The government, during Mr. Jaitley’s tenure, had sought to sell about a third of Hindustan Petroleum Corp. Ltd and Bharat Petroleum Corp. Ltd. However, these were challenged on the ground that the government wasn’t entitled to sell stakes in these companies without seeking the approval of lawmakers, since the companies were set up under laws formulated by parliament.

Mr. Jaitley’s was brought up in New Delhi. He studied at St. Xavier School until 1970, then graduated in commerce from Sri Ram College of Commerce, before going on to study law at the University of Delhi.

He made his political debut as a leader of the student wing of theBJP and was elected president of the students’ union of Delhi University in 1974. He was under preventive detention for 19 months between 1975 and 1977 when then-Prime Minister Indira Gandhi declared a national emergency, suspending civil liberties in India.

In government, he will face major challenges in implementing policy changes such as implementing the Goods and Services Tax, which has been held up for years due to differences between federal and state governments. “Even in issues such as land development for major projects, he will have to get everyone working together,” said Rajiv Biswas,  chief economist for Asia at research firm IHS. “He will need a coordinated approach so that states don’t create obstacles in implementing key legislations,” he said.