Meet the Window Washers That Transform Into Superheroes for Sick Kids

Rober Corcoran has been a window washer for 35 years. But on Wednesday, he was Batman.

The 61-year-old grandfather of two rappelled down the side of Mayo Clinic Children’s Center alongside Spiderman and Superman.

“When a kid wanted to know why I was so old, I told him I played the original batman,” Corcoran said with a chuckle.

John Carroll, 48, dressed up as Spiderman.

“It’s one thing I look forward to doing all year,” said Carroll, who has worked as a window washer for 15 years.

After rappelling down the side of the building, Carroll and Corcoran went inside to meet the kids, who were appropriately shocked to come face-to-face with their high-flying heroes.

“The first time it happened, I was kinda crying because it means a lot to those kids,” Carroll said. 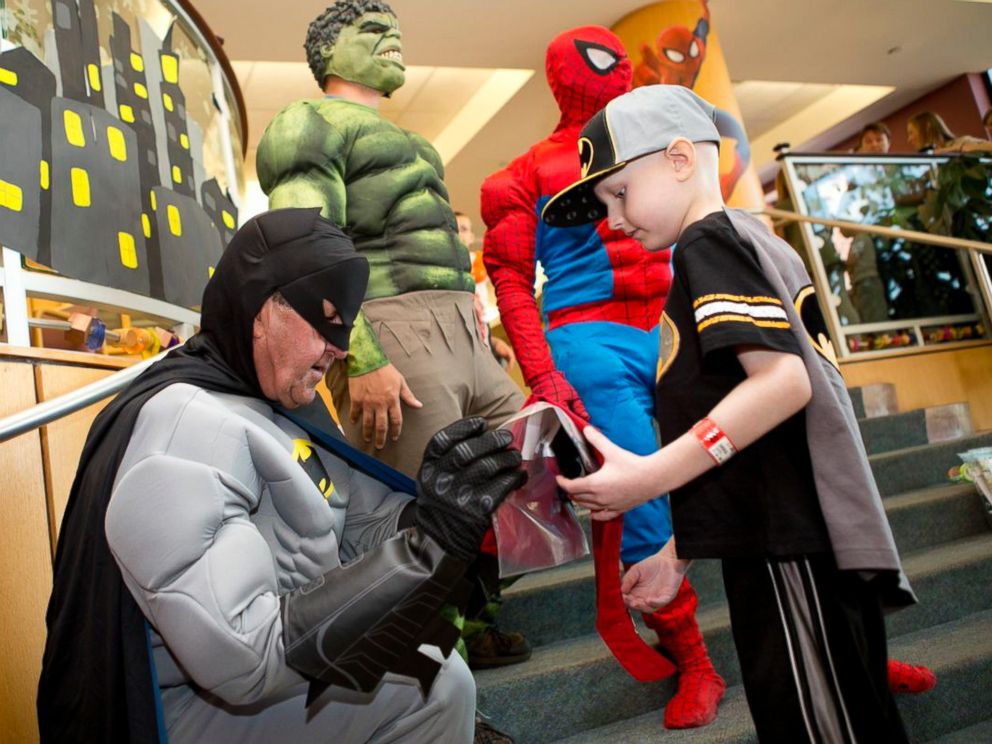 PHOTO: Roger Corcoran, a 61-year-old grandfather, signs autographs as Batman for a fan.

Carroll and Corcoran work at ISS Facility Services, which washes windows for Mayo Clinic. Charlie Kleber worked with Mayo Clinic to set up the special event, and said he picked some of his best guys to swing down and make the kids smile.

He said he’s watched even the sickest kids come alive when they’re face-to-face with the superheroes.

He called Wednesday’s superhero experience “life-changing,” and said they were all struck by a special patient: 13-year-old Claire Strawman, who in April became the youngest heart-lung patient Mayo Clinic had ever transplanted. 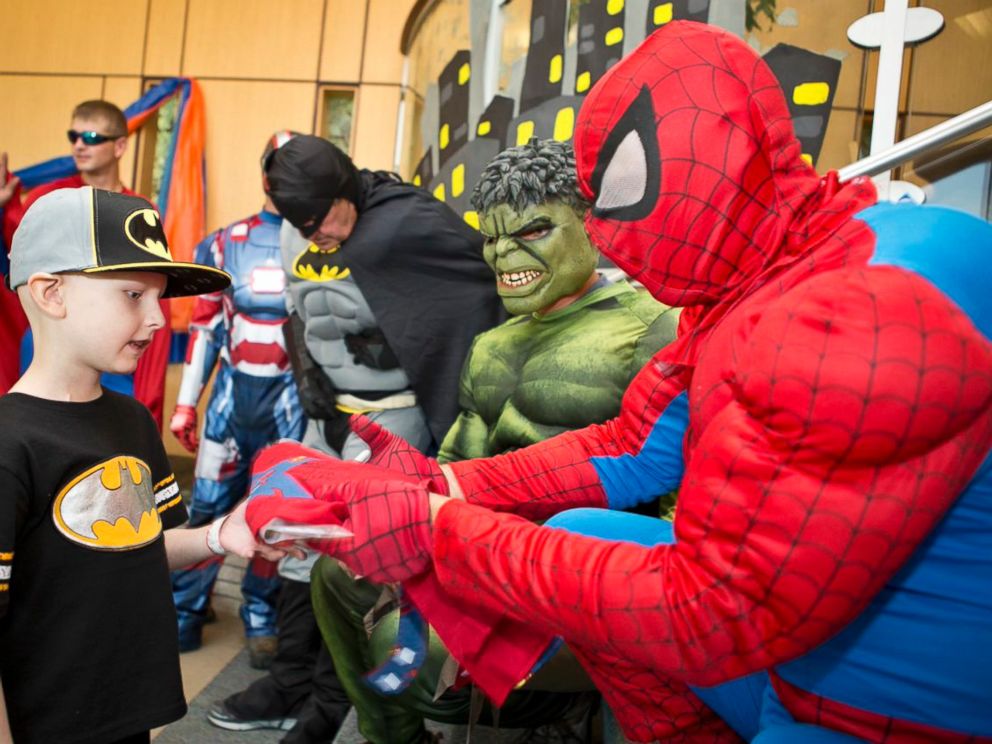 PHOTO: John Carroll, 48, ordered the costumes for the window-washing team. He got to be Spiderman.

She told them about how she went into lung failure and underwent a transplant in April. She was hospitalized for about seven months before being released a few weeks ago. But she got sick on Monday and needed to come back.

“I got goose bumps right now telling you that story,” Kleber said.

Claire is on immunosuppressant drugs to prevent her from rejecting the new organs, but the drugs also make her more prone to infections. When she got sick, her parents worried and brought her back to the hospital, according to her mom, Ellen Strawman. She was in the pediatric ICU when the superheroes visited.

“Just seeing them put a big smile on her face,” Strawman said, adding that Claire left the hospital today for her home in Bloomington, Minnesota.

“She told us what happened to her and everything. We were all standing around her tearing up,” Carroll said. “That story made you feel so proud to do it for the kids because it means so much to them. It was great.” 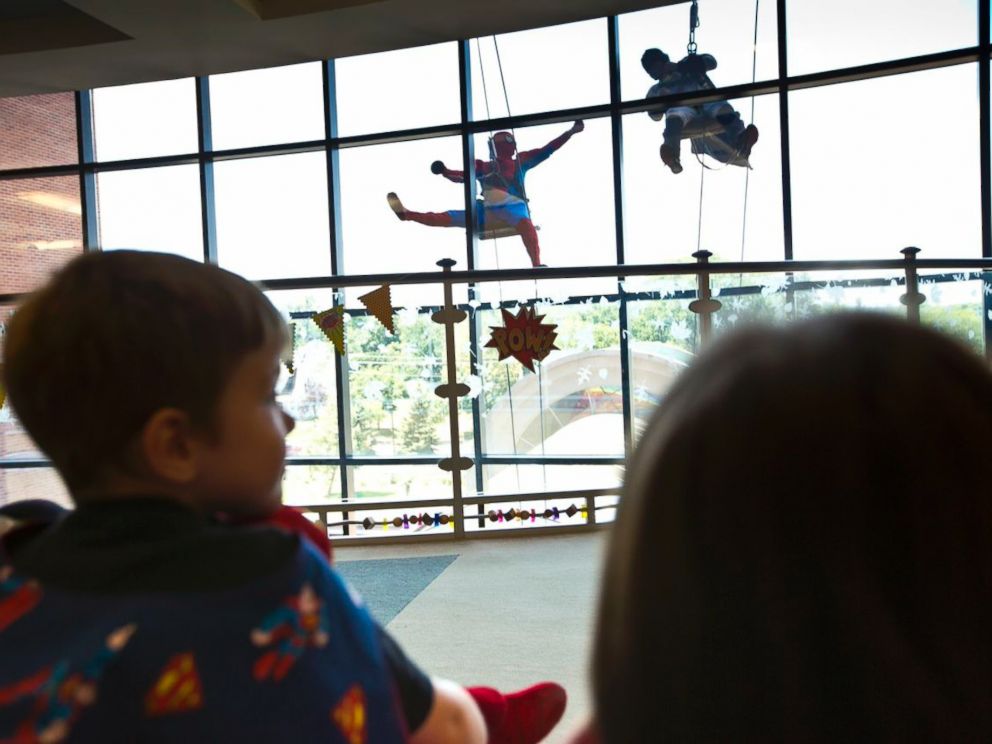 PHOTO: The staff, children and parents gathered in an auditorium to watch the superheroes rappel 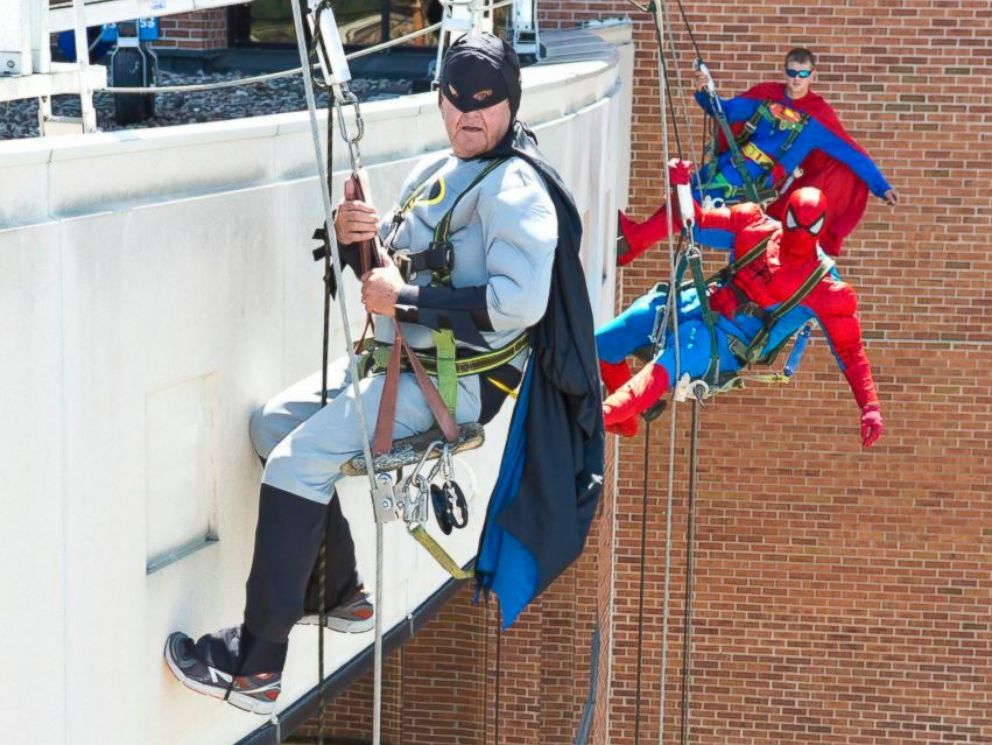 PHOTO: These window washers took a break from their day jobs to dress up as superheroes