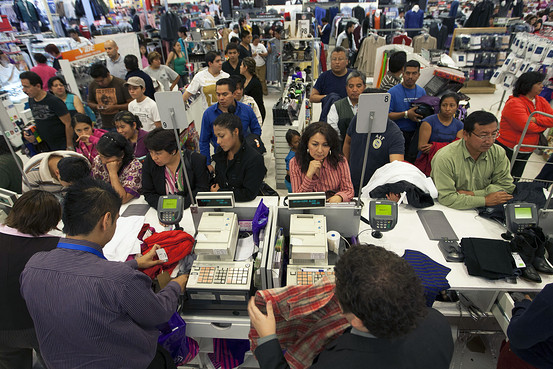 The U.S. isn’t the only place where wages aren’t keeping up with gains in employment.

South of the border, unemployment is gradually falling and more jobs are being created in the formal economy, but wages—already notoriously low–remain in a rut.

Mexico’s National Statistics Institute said last week that Mexico’s unemployment rate was 4.3% in February, down from 4.7% a year earlier. Urban unemployment was 5.3%, down from 5.8%.

A recent report by the Bank of Mexico showed that while the number of people employed has risen steadily since the 2008-09 crisis, average income has fallen and total wage mass has given back gains made in the wake of the economic slump. Why this is, despite near-record gains in the number of formal private-sector jobs being created, is a key question for a $1.2 trillion economy that has been partly held back the past two years by sluggish consumption and a slowdown in consumer credit.

One problem, says Labor Minister Alfonso Navarrete, is that many of the jobs are at small- and medium-sized companies that often struggle to meet payroll, never mind boost wages. Those small companies, and other informal enterprises, tend to be where the lowest wages apply.

In December, the minimum wage commission, formed by business, government and labor representatives, raised the minimum wage by 4.2% for 2015, in line with last year’s inflation and above the 3% inflation expected for this year. Relatively few people earn the minimum wage, which is less than $5 a day, although it serves as a benchmark for other wage negotiations.

That was a start in turning things around, but isn’t going to recover the 74% of purchasing power that the minimum wage has lost in the past three decades, Mr. Navarrete said.

Workers with college educations have seen wages fall even more sharply, as much as 30% since the turn of the century, says Raymundo Campos, who coordinates doctoral studies in economy at the Colegio de Mexico university and specializes in labor issues.

It could be that demand hasn’t kept up with the increase in the past 15 to 20 years in the number of people finishing college, he said.

But wages have fallen more for older college-educated employees than for newcomers to the workforce, and that could have to do with new technological skills that employers seek and that older workers have trouble adapting to, he adds.

A 2014 survey of 499 companies by the think tank Cidac found a disconnect between employer requirements and candidates’ abilities and expectations. In 70% of cases, employers gave lack of the right skills as the reason for not filling vacancies, and only 2.3% said it was because of unrealistic wage demands. By contrast, 13% of the candidates who were rejected were turned down because of what companies saw as excessive wage demands.

Proposals to raise the minimum wage by more than inflation to recoup more of its lost purchasing power have met lukewarm response from business, government and central bank officials, who insist that for wage gains not to be inflationary they must be accompanied by gains in productivity.

And there’s the rub.

In the fourth quarter of 2014, according to the statistics institute, labor productivity rose 2.6% from a year before, including a 2.1% increase at manufacturing industries. Manufacturing compensation, meanwhile, including wages and benefits, rose just 0.5% in 2014 after inflation. Retail wages fared a little better, rising 0.9% in real terms.

Mexico’s GDP Report Gets an Overhaul

In Mexico, Jobs Without The Recovery