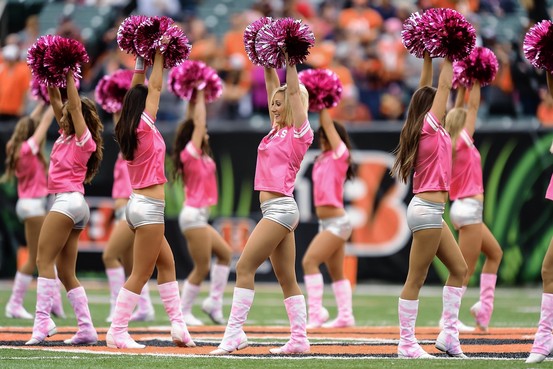 National Football League cheerleaders pushing for fair wages won an initial victory last week, but not all of their former colleagues are rooting them on.

The Oakland Raiders struck a tentative $1.25 million settlement with 90 Raiderettes in a deal that resolves a lawsuit in which the women alleged they weren’t paid minimum wage for their work.

Some aggrieved former cheerleaders heralded the victory as a breakthrough.

“I never dreamed that my decision to find a lawyer and file a lawsuit would lead to the kind of sweeping changes we are now seeing for the women of the NFL,” said former Raiderette Lacy T. in statement. The cheerleaders’ last names in the Raiders’ case were withheld from court papers.

In addition to the Raiders, similar suits were filed against the Buffalo Bills, Cincinnati Bengals, New York Jets and Tampa Bay Buccaneers. After the suits were filed this spring, the Bills disbanded their squad, the Jills.

Some former cheerleaders, though, are not as happy about the changing landscape.

The lawsuits “ruined it for the rest of the girls,” said Lori Marino, a former cheerleader and now president of the Buffalo Jills Alumni Association. “They were well informed going into tryouts that the cheerleader squad wasn’t a paid job. It wasn’t a job at all. It was a sport to be enjoyed.”

Some of the cheerleaders who filed the suits said their love of football and the excitement of the crowd drew them to try out for the team. But that opportunity doesn’t mean they shouldn’t be paid fairly, they said.

“The lawsuit is not about the money, it’s about equality,” said former Buccaneers cheerleader Manouchcar Pierre-Val, who sued the team in May on behalf of herself and other former cheerleaders. “It’s about the fact that the NFL is a billion-dollar organization and the girls deserve to be compensated fairly.”

An NFL spokesman said it’s up to the teams to choose whether or not to have cheerleaders and the league itself is not involved in the selection or compensation of the squads.

Buccaneers spokesman Nelson Luis said the team views “the role of our cheerleaders as game day entertainers as well as ambassadors both in the stadium and around the community.” He wouldn’t discuss specifics of the lawsuit against the team.

“There definitely needs to be conversations” about cheerleaders’ pay and treatment, she said. But some teams will react by saying, “Let’s just make the problem go away.”

Ms. Lacey said there should be cohesion among cheerleading squads. There is not a professional organization for cheerleaders and they are not members of unions.

Cheerleaders “don’t have a voice, an advocate or an industry understanding,” she said. “I’d love it if we could get together and talk about standards.”