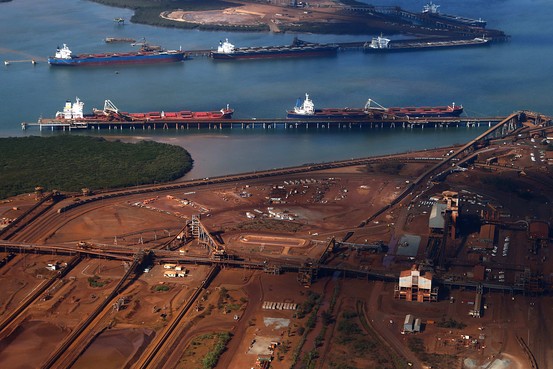 Ships waiting to be loaded at Port Hedland in the Pilbara region of Western Australia.
Reuters

Australia’s central bank Friday lowered its expectations for growth over the next 18 months, reflecting rising uncertainty about the economic outlook as a decade–long mining investment boom ends.

What’s surprising about the growth downgrade is that it comes after 12 months with official interest rates set at a record low 2.5%. With that kind of stimulus in place for that amount of time, economists expected faster growth. Instead, the economy is now expected to walk rather than run over the medium-term, and at a pace that’s unlikely to put a serious dent in the unemployment rate.

The expected transition away from a reliance on mining is not going well.

Data Thursday showed unemployment rose to a twelve-year high of 6.4% in July from 6.0% June. While the monthly government data series can be volatile, there is a growing realization that the peak in unemployment may not have been reached yet. Youth unemployment is currently running at close to 20%.

“The non-mining economy should already be firing, and it’s not,” said Sally Auld, debt strategist at JPMorgan in Australia. If things don’t improve over the next few months, there’ll be growing pressure for further interest rate cuts, Ms. Auld added.

With growth set to be mediocre at best, inflation contained, and unemployment set to rise, the question of whether interest rates need to be cut further is again center stage.

In the last 48 hours, money markets have moved to aggressively price in a likely rate cut in the first quarter of 2015. Futures market pricing Friday suggested there is a 50% chance of a cut by December, rising to 64% by March. In response, the Australian dollar has fallen to two-month lows. As recently as last month, markets were forecasting a period of stability, before an eventual hike in the second half of 2015.

There are a number of factors weighing on the Australian economy. Commodity prices have tumbled this year. Bulk commodity exports such as iron ore and coal have fallen. Iron ore prices are currently 29% below levels at the start of January, while coal prices have been dragged down by slower growth in Chinese demand.

Second quarter GDP growth data is expected to reflect a sharp deterioration in the country’s trade accounts. Some economists say there is a strong chance the economy will contract in the second quarter on the back of falling commodity prices.

At the same time, the Australian dollar remains overvalued, trading well above US$ 0.9, eroding exports earnings and preventing areas of the economy like manufacturing from recovering and taking up the slack from falling mining investment.

Ms. Auld said that even if the Australian dollar steps down to around US$0.85 over coming weeks, it won’t be enough to lift the economy out of its deepening hole.

The government’s austerity drive isn’t helping. Treasurer Joe Hockey in May announced new taxes and spending cuts in the federal government’s 2014-15 budget. Consumer confidence plunged at a pace not seen since the global financial crisis in the months following the budget, and was slow to recover.

Adam Boyton, chief economist at Deutsche Bank in Australia, said the downgrade in the RBA’s growth forecast “tells you there was a bit too much optimism” about the economy at the start of the year.

“Maybe the realization for Australia is that we don’t transition easily back to another strong economy. Instead we muddle through,” Boyton added. “If interest rates are to change in the next six months, it will be a cut.”

What might prevent a cut is strong house price growth, Boyton added. Australian house prices have risen by around 10% in the last year, with markets like Sydney running at 15%, much of it fueled by investors not owner-occupiers. The RBA must be careful not to stoke that too much further, he said.