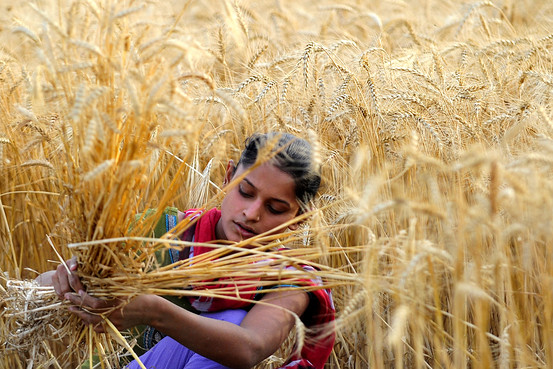 An Indian farmer harvests wheat in a field near Allahabad.
Agence France-Presse/Getty Images

Prime Minister Narendra Modi said over the weekend that his government blocked ratification of a WTO pact because India’s demands for more leeway to stockpile food are essential for safeguarding the country’s farmers.

“There are efforts to isolate India over WTO,” Mr. Modi told a meeting of his Bharatiya Janata Party’s national council in New Delhi, according to his official Twitter account. “But tell me: Do we choose feeding our poor or getting good press world-wide?”

India and a few other countries refused to sign off on the WTO deal, which is aimed at streamlining customs procedures world-wide and which the WTO’s member governments approved unanimously at a meeting in Bali in December, until the Geneva-based body makes faster progress on changing rules that limit farm subsidies.

Talks went down to the wire but ultimately fell apart on the July 31 deadline for ratification. WTO negotiators meet again in September.

Mr. Modi cast the government’s veto as a rebuke to the stance of his Congress-party predecessors. “Those who asked for votes in the name of food security deviated from their agenda,” Mr. Modi said, according to his official website. “We chose to serve the poor. And the WTO agreement deviates from this purpose.”

The dig at Congress created an uproar by opposition party members in Monday’s session of Parliament’s upper house, causing it to adjourn twice. Anand Sharma, the former commerce minister who approved the WTO trade-easing deal in Bali, said Mr. Modi’s statements were “misleading,” according to the Press Trust of India. Mr. Sharma lamented the squandering of India’s goodwill in Geneva, saying that the WTO’s taking issue with government stockpiling shouldn’t be read as an assault on India’s right to food security.

India sells food at subsidized prices to needy households through a network of more than 500,000 “fair-price” shops. To supply these shops, government agencies buy rice and wheat directly from farmers. But because those purchases take place at above-market prices, they are at risk of violating the WTO’s cap on subsidies that advantage domestic growers and therefore influence trade.