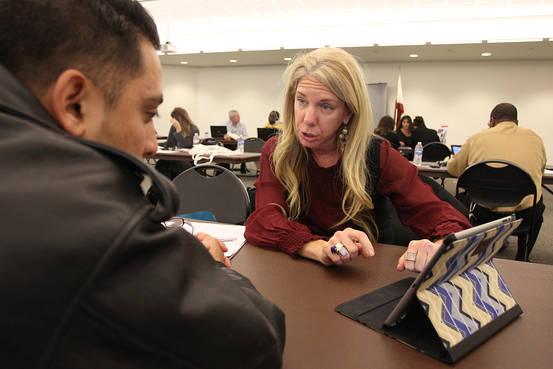 An insurance expert helps a man enroll in health-care coverage under the Affordable Care Act in November 2013. Men—particularly young men—are much more likely to be uninsured than women.
DAVID MCNEW/GETTY IMAGES

The share of Americans without health insurance has plunged, but significant demographic gaps remain between who has coverage and who does not.

The Census Bureau reported Wednesday that men, particularly young men, are much more likely to be uninsured than women. Both men and women are most likely to be uninsured at age 26—the year they are forced off their parents’ insurance policies—and become increasingly likely to obtain insurance as they age. By the time people hit 65, Medicare assures most people health coverage. Men and women are more or less equally likely to have private health insurance, most often through their jobs. But young women are more likely to receive government health care, specifically Medicaid. Poor single mothers are especially likely to be eligible for Medicaid. But not so for men. More than a quarter of young men lack insurance at some ages, even as the overall share of uninsured has dropped to around 10%.

• About 27% of all foreign-born are not covered, and among noncitizens the figure is 40%. The American Community Survey does not ask respondents whether they have legal immigration status, so this high rate of uninsurance reflects their difficulty in obtaining health-care coverage.

• Those with more education are highly likely to have insurance. For those with at least a bachelor’s degree, only 5.1% lack coverage. Conversely, 26.4% of high school dropouts have no coverage.

• Of America’s largest metro areas, Boston has the lowest uninsurance rate, at 3.8%. New York’s rate of 10.5% and Chicago’s 10.9% rate are close to the national average. Washington, Philadelphia and San Francisco have lower uninsurance rates of 9.6%, 8.5% and 7.8%, respectively. Los Angeles, on the other hand, has a higher rate at 14.7%. Houston, Dallas and Miami have the highest rates of uninsurance among the largest 10 U.S. cities, all above 18%.

Percentage of Uninsured in U.S. Dropped in First Year of Obama’s Health-Care Plan

U.S. Job Growth Not Making a Dent in Poverty