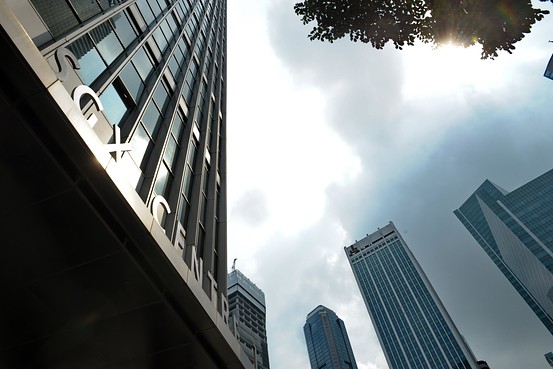 A view of the Singapore Exchange Limited building in Singapore.
Agence France-Presse/Getty Images

Singapore’s disappointing second-quarter economic data has a bright side: the country’s battle to restructure its economy may be showing some results.

That is encouraging news for an economy in the middle of a multi-year restructuring effort aimed at moving the city state up the value chain.

It’s happening—slowly—and Tuesday’s revised GDP data may hold the clues. While non-oil domestic exports continue to slump, manufacturing activity has gained this year. Singapore’s local demand is too small to account for that extra production. So why is the manufacturing activity not showing up in the export data?

The answer, according to ING, is that Singapore-based firms are increasingly engaged in the design phase of manufacturing, not the physical production of goods. The phenomenon is known as the “servicization” of manufacturing – not the most catchy term, perhaps, but a serviceable one nevertheless.

Singapore central bank managing director Ravi Menon also has referred to this trend, saying last month that in some cases production of goods is being shifted offshore but control centers remain in Singapore, such as in the semiconductor industry. Singaporean companies are increasingly turning to southern Malaysia for production, where wages are cheaper and government incentives provide tax breaks for new industry.

In a bid to become a service-led, high value-added economy with the same drivers as most developed economies, Singapore has put pressure on its manufacturing sector though employment policies.

The effect has been to slow growth in the country. Revised second quarter GDP estimates put growth at 2.4%, on-year, or a mere 0.1% growth compared with the first three months of the year, the government said Tuesday. It expects full-year growth to be between 2.5% and 3.5%, far below many of Singapore’s neighbors.

ING is unsure whether the upward revision of manufacturing’s contribution to growth in the second quarter can be attributed to Singapore’s productivity-enhancing policies. But in a note the bank says: “We think the economy is restructuring faster than many believe.”

ANZ economist Daniel Wilson argues that Singapore’s economic transition is proceeding at “a steady pace.” He points to data on labor intensity–a measure of GDP output of a sector relative to the number of people it employs.

Labor intensity is high in some segments but has fallen in manufacturing and construction, two of the areas targeted for structural change, according to ANZ data. “This would imply productivity has increased, the goal of restructuring,” said Mr. Wilson.

Not all analysts are as upbeat about manufacturing, however. J.P. Morgan & Chase economist James Sullivan argues the sector is in for a further crunch as the structural transformation continues, and points out that both non-oil exports and manufacturing data can be volatile.

Barclays expects weak services in the second half of 2014 will be “offset by a stronger manufacturing sector, as the impulse from the ongoing recovery in external demand becomes felt.”