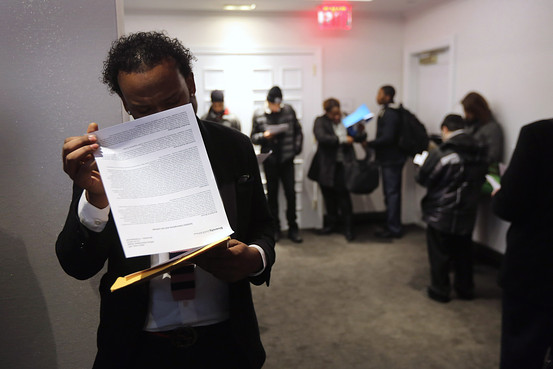 Applicants wait in line at a job fair in Manhattan.
Getty Images

More Americans are bouncing back after losing their jobs, and fewer people are accepting a pay cut as the price of returning to work.

Some 9.5 million people lost their jobs between January 2011 and December 2013, including 4.3 million who lost jobs they had held for at least three years, the Labor Department said Tuesday in its biennial survey of displaced workers. As of January 2014, 61% were back at work.

By comparison, less than half of the 15.4 million workers who lost their jobs from 2007 through 2009, during the recession years, were reemployed at the beginning of 2010.

The prospects have gotten brighter for people who find themselves out of work, but many of the recession’s scars have been slow to heal. Wages in particular have been stagnant, with inflation-adjusted hourly earnings for private-sector workers unchanged in July from two years earlier, according to Labor Department data.

Many workers who lost their jobs took new ones that paid less. Job growth has been robust in some typically low-wage fields, such as food service and temp work. But payrolls remain far below pre-recession levels in traditionally high-paying sectors like manufacturing and government. And some 7.5 million Americans in July were working part-time jobs because they couldn’t find full-time work.

But the situation may be improving, Tuesday’s report shows. As of January, 1.8 million workers who had held a full-time job for at least three years, then lost it between 2011 and 2013, were back at work in full-time jobs. A majority, 52%, of those reporting wages said they were earning the same or more than they had at the jobs they had lost.

The Labor Department defines a dislocated worker as someone 20 years old or older who lost or left a job because their plant or company moved or shut down, because there wasn’t enough work for them, or because their job or shift was eliminated.