Most Federal Reserve officials continue to expect the central bank to first increase interest rates some time next year, according to official projections released Wednesday.

In the forecast, 14 of 17 officials said they continue to believe the Fed’s first increase in near zero short-term rates will occur in 2015. One official believes the Fed should boost rates this year, while two think the central bank can hold off until 2016. The September forecasts represent a modest shift from June’s projections, when one hoped the Fed would lift rates this year, while 12 saw 2015 as the most likely point of liftoff. 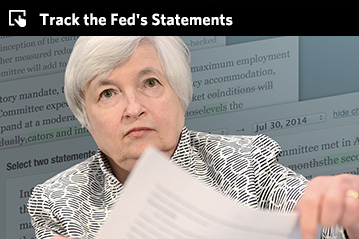 The Fed’s forecasts were released in the wake of its latest gathering of the monetary-policy setting Federal Open Market Committee. Central bankers announced Wednesday a continued wind down of their bond buying stimulus program. Fed officials also continued to say they expect their ultraeasy monetary policy stance to be maintained for a “considerable time” into the future.

The U.S. central bank’s so-called “dots plots” describing its monetary policy outlook have evolved into a challenging part of the Fed’s forecasting activities. The dots denote the monetary policy views of all of Fed governors and regional bank presidents, and as such, many observers look to shifts in the distributions of these individual forecasts as an indication of a potential change in direction for the central bank.

Fed members have a diverse array of views about the future. That said, central bank monetary policy making has for some time been firmly in the hands of those who have supported aggressively easy money policies to help the economy get back on track. At her June press conference held at the FOMC meeting, Fed Chairwoman Janet Yellen said predicting the future path of monetary policy is inherently difficult. She said then that each official contributing a forecast had a “considerable band of uncertainty around their own individual forecast.”

Fed officials continue to see little threat on the inflation front. They reckon their preferred price gauge, the personal consumption expenditures price index, will come in between 1.5% and 1.7% this year. In 2015, price pressures are seen ticking up to a 1.5% to 1.9% gain. The Fed’s official target is 2%.

For some time now, the Fed has found itself in the position of underestimating the level of improvement in the unemployment rate, while overestimating the how much growth the economy would see.

In its last major forecast revision in June, the Fed was forced to take account of the hit the economy had taken from adverse weather over the start of the year and revise lower its growth estimate for the current year. Officials have been confident that first quarter weakness would prove transient, and so far, the data seen over the course of the second quarter and beyond have supported that contention.

5 Takeaways From the Fed September Meeting

Required Reading: Catch Up on the Federal Reserve Before Its Pronouncements

How Does Janet Yellen Spend Her Time? Check Her Calendar