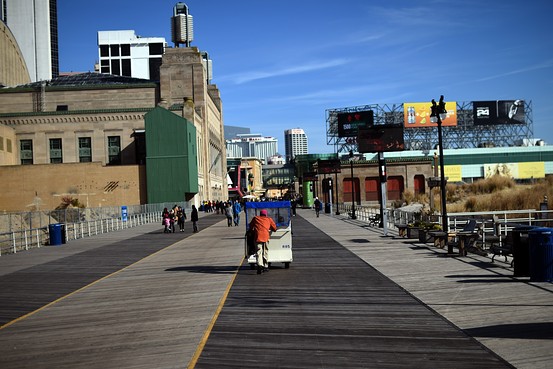 Atlantic County, N.J., recorded the largest decline in employment through the first half of the year, largely due to job cuts at casinos.
Agence France-Presse/Getty Images

Employment and wages grew in the vast majority of large U.S. counties through the first half of the year, a broad improvement that masks the unevenness of the economic expansion.

More than 92% of large counties recorded year-over-year gains in employment through the end of June from a year earlier, and 90% saw average weekly wages increase, according to Labor Department data released Thursday. The nation’s 340 largest counties have 75,000 or more workers.

The gains are consistent with the national unemployment rate dropping by more than a percentage point during that time and steady hiring, especially among private-sector employees.

The new data showed some of the strongest growth in energy-producing counties. Employment in Weld, Colo., grew 8.9%, the most of anywhere in the country, and weekly wages advanced 5.8%. Midland, Texas, posted the best wage gain, up 9%, to match with a 5.5% advance in employment. 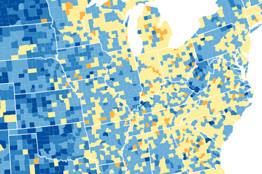 Click on the map to see an interactive graphic of where wages have risen and fallen the most over the past decade.

Employment grew strongly in other parts of the country as well, increasing more than 5% in Sarasota, Fla., Clark, Wash., and Charleston, S.C., in June from a year earlier. Wages grew in each of those counties as well.

But employment gains and wage growth didn’t always match up.

Benton, Ark., the county home to Wal-Mart Store Inc.’s headquarters, posted the second-best gain in employment, up 6.8%, but average wages there fell 0.8%.

Atlantic, N.J., recorded the largest decline in employment, down 1.6%, but wages there grew 1%. That likely reflects reduced employment at Atlantic City casinos, which are generally low-wage jobs.

Five of the 25 large counties with the best wage gains were in Texas. But the county with the biggest decline, Williamson, is also in the Lone Star State.

Wages there fell 2.7% despite at 3.6% gain in employment. Declining pay could reflect reduced employment at Dell Inc. The computer maker, based in Round Rock, Texas, has been cutting staff at its headquarters.

Over the past decade, wage gains have been uneven in the U.S. From 2004 and 2013, one-third of all U.S. counties have seen their pay decline, when the figures are adjusted for inflation, according to separate Labor Department figures. Gains were the strongest in energy-rich areas and the weakest in the industrial Midwest, Southern California and parts of the South.

Map: Where Workers’ Pay Has Risen the Most in Past Decade

Joblessness Fell in Most States in October. How Does Yours Compare?