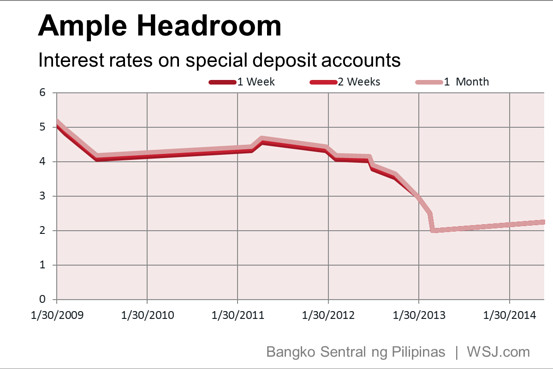 The Philippine central bank’s decision to pay higher interest on its special deposit accounts—a tool it uses to control liquidity in the market – represents a change of direction for the Bangko Sentral ng Pilipinas, and an intensification of recent moves to tighten policy.

Even after last Thursday’s increase, however, SDA rates are barely half their level of three years ago. That’s because until this week the bank had been steadily reducing the interest it pays on the accounts, aiming to force money into the broader economy and support economic growth.

The special deposit accounts continued to attract inflows even as the central bank pared returns on one-week funds by more than 2.5 percentage points between May 2011 and April 2013 (and even more than that for two- and four-week funds). That was a period when easy monetary policy in the U.S. and other developed economies was pushing capital toward emerging markets like the Philippines.

Last July, the central bank began restricting access to SDAs, hoping to force money into the financial system and stimulate the economy. Since that move, money supply has been growing every month by more than 30% over its year-earlier levels.

That’s extremely fast, and at two recent meetings the central bank raised the proportion of funds banks must keep on reserve by one percentage point each time, to the current 20%. That helped limit money supply growth to 32.1% in April — down from 37.3% in January, but still double the pace the BSP believes is sustainable.

Central bank Gov. Amando Tetangco Jr. said Thursday’s quarter-percentage-point increase in SDA rates was a prudent move “to counter risks to price and financial stability that could emanate from ample liquidity.” He said the central bank can still tinker with the accounts to make sure liquidity doesn’t grow by more than 17% on-year every month.

Many economists now think that for the rest of the year the central bank will use the SDAs as its main tool for managing inflation, keeping its benchmark overnight rates at record lows of 3.5% for borrowing and 5.5% for lending at least until early 2015.

ANZ economist Eugenia Victorino said the central bank could raise the SDA rates by another quarter-percentage point at its July 31 meeting.

“We believe that further tightening is warranted,” she said.