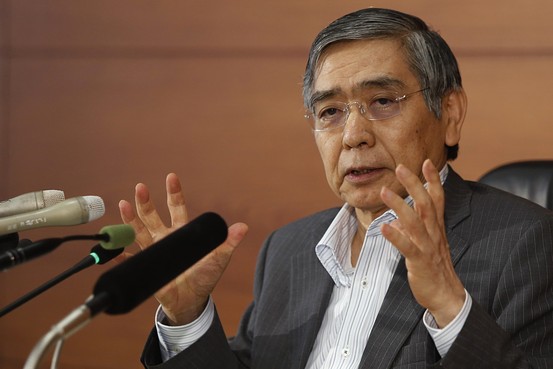 Bank of Japan Gov. Haruhiko Kuroda speaks during a news conference at BOJ headquarters in Tokyo on June 13, 2014.
Reuters

The Bank of Japan ‘s strategy to end the country’s long slump rests as much on psychology as on economics. There’s actually no econometric model that directly connects the ongoing massive money-printing program to the central bank’s plan to generate 2% inflation by next year. BOJ officials openly admit the campaign will only work if enough people believe in it — if the Japanese public understands the central bank’s policies and expects them to transform the economy, then changes their behavior in ways that really do change the economy.

On that score, a BOJ survey of public opinion shows Gov. Haruhiko Kuroda’s public relations campaign has considerable work to do.

On the question of whether people feel “confidence” in the BOJ, 43.7% said they did, while 46.7% said it was “difficult to say.” The rest said they didn’t have confidence. That represented a slippage from the December survey, when 45.2% expressed confidence.

And for all of Mr. Kuroda’s attempts to translate monetary policy into simple language — his famous 2-2-2 pitch (doubling the monetary base in two years to hit 2% inflation) — just 5.1% of the public said they felt central bank explanations were “clear.” The portion of people who said they “have never heard” about the BOJ’s famous inflation target actually increased to 41.4% in June from 29.5% in March.

A look at the long-term trends in the report shows that despite the talk of “regime change” over the past year and a significant change in BOJ rhetoric, public attitudes about the central bank have been fairly steady in recent years.

Confidence in the BOJ did register a noticeable dip in Dec. 2012, the height of Shinzo Abe’s BOJ-bashing during his campaign to become prime minister. But other than that survey, the level has been fairly steady — even under Mr. Kuroda’s predecessors, who were roundly criticized for doing too little to inspire public faith in monetary policy. In June 2010, for example, 43.6% said they had confidence in the BOJ, virtually the same level as four years later.

The latest survey was conducted May 9 to June 5 and received 2,275 responses.