N.Y. Fed President Dudley: I’m More of a Fire Warden, Not a Cop on the Beat – Real Time Economics

Federal Reserve officials are infamous for their love of using metaphors to explain complex monetary policy. Think taking away punch bowls when the party gets swinging.

During a tense hearing Friday, the metaphors extended to the Fed’s other key duty: overseeing the nation’s largest financial firms, a role that grew for the central bank after the 2008 crisis. 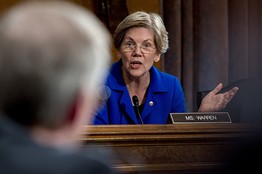 Sen. Elizabeth Warren (D., Mass.) asked New York Fed President William Dudley to describe his organization’s supervisory responsibilities. Would he liken it to a cop walking the beat? she asked.

That’s not quite how Mr. Dudley sees it. He offered a different comparison: a fire warden that focuses on making sure a building doesn’t catch on fire and burn down.

“I don’t think our primary purpose as supervisors is a cop on the beat,” he said.

The New York Fed’s job is mainly about “ensuring the safety and soundness of the institutions that we supervise,” he said.

5 Things to Know About Big Banks, the Federal Reserve and Policing Wall Street

It’s Up To Congress How to Fill My Job, New York Fed Chief Tells Senator