The largest boom in new apartment construction in three decades is doing little to slow rent increases or ease affordability concerns for renters across the country, a new report finds.

A record number of renters are spending more than 30% of their incomes on rent—a ratio that economists consider financially burdensome, according to a report released Wednesday by Harvard University’s Joint Center for Housing Studies. The report, “America’s Rental Housing: Expanding Options for Diverse and Growing Demand,” says more than 21 million households are burdened by how much they pay in rent, up from fewer than 15 million in 2001.

Nearly half of renters are paying more than 30% of their incomes in rent, the report says. While that is a slight improvement from 2011, it remains above where it has been for most of the last 13 years. 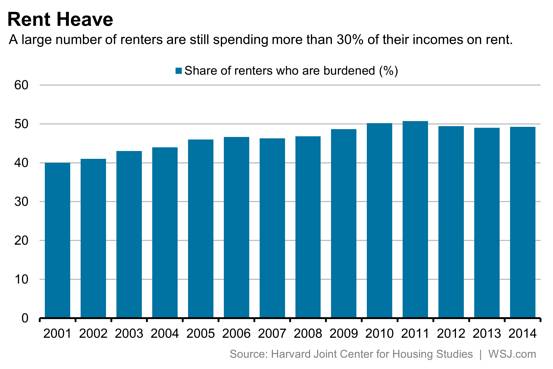 Inflation-adjusted rents rose 7% from 2001 to 2014, while renter household incomes fell 9%, creating affordability challenges for many renters. A recent boom in construction would normally be expected to ease such concerns by providing a flood of new supply.

One reason that hasn’t happened is simply that new supply hasn’t kept up with the swell in demand. In mid-2015, 43 million families and individuals lived in rental housing, up nearly 9 million from 2005—the largest gain in any 10-year period on record. In contrast, the number of rental units expanded by just 8.2 million, most of that from the conversion of single-family homes into rentals.

Another factor is that much of the new supply is aimed at higher-income renters. The median asking rent for new market-rate apartments hit $1,372 last year, a 26% increase from 2012, according to the report.

Developers say this partly reflects increases in land prices and construction costs, which make it difficult to build anything but high-end buildings. “As my father always says, a sheet of drywall doesn’t care if it’s in a luxury high-rise or an affordable housing project—it costs the same,” said Toby Bozzuto, president and chief executive of the Bozzuto Group, a Washington-area builder.

So far at least, those high-priced apartments are being gobbled up by young professionals renting well into their 30s and retirees downsizing into apartments. The number of higher-income renters earning $100,000 or more has grown by 1.6 million over the last decade.  Households over age 40 now make up the majority of renters, according to the report.

The report’s findings underscore a challenge to helping especially middle-income renters. Years of low rates of rental construction have created a shortage of older rental units affordable to firefighters and paralegals. It is likely to take years for some of housing being built now now to come down in price, leaving cities struggling to hold onto middle-class families.

“I think the prognosis unfortunately is probably not good,” Mr. Herbert said.

Rents Rise Faster for Midtier Apartments Than Luxury Ones

Renters Will Continue to Struggle for the Next Decade, Harvard Study Says