Americans seeking a raise in the new year might try looking for a new job.

In an economic recovery weighed down by subdued income growth for most Americans, a Kansas City Fed paper suggests those who are moving on to new jobs are better able to negotiate pay increases.

By focusing on job “switchers,” Kansas City Fed economist José Mustre-del-Río says he is able to get a better sense of present wage conditions.

“Unlike wages of stayers, wages of switchers are much more cyclically sensitive, as contracts signed with new employers are more likely to reflect current economic conditions,” he writes in a research note. “We find that switchers’ wage growth has been quite strong the past several quarters as the labor market continues to tighten.”

For instance, job switchers’ average wage growth rose from around 4.3% per quarter in the first quarter of 2013 to 5.6% in the third quarter of 2014, the study found. Those changing jobs in leisure and hospitality experienced average wage growth of 7.7%, well above a the 2% experience by the average worker last year and that has kept consumers barely keeping pace with inflation.

One such signal of improvement that has been specifically flagged as important by Fed Chairwoman Janet Yellen is the rate of workers quitting their jobs. This tends to be good news because workers who quite voluntarily only tend to do so when better opportunities are becoming more readily available. That figure is now at a six-year high. 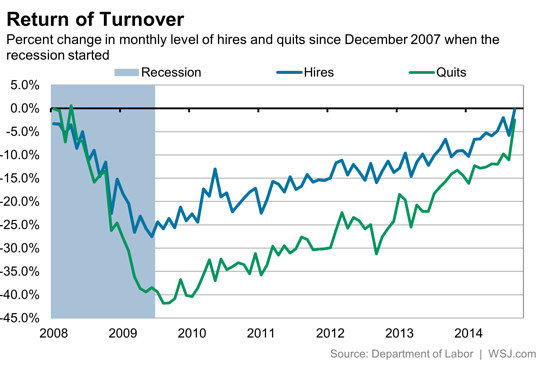 The Fed is considering raising benchmark interest rates in 2015 from effectively zero, where they have been since Dec. 2008, during the depths of the financial crisis and Great Recession.

Officials are looking for signs that the economy is finally catching up to its full potential, and continues to get mixed signals as a steadily improving labor market coexists awkwardly alongside stubbornly low inflation.

Mr. Mustre-del-Río is optimistic that the strides in employment will eventually lead to wage growth that extends beyond those who are able to readily switch jobs.

“As the labor market continues to tighten and turnover continues to rise, these trends should become more broad-based.”