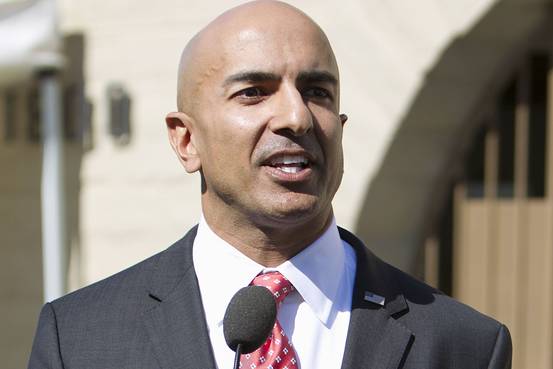 Neel Kashkari, a prominent business executive and one-time candidate for governor of California, has been chosen to be the head of the Federal Reserve’s regional bank in Minneapolis.
STEVE YEATER/ASSOCIATED PRESS

Neel Kashkari, chosen to take the helm at the Federal Reserve Bank of Minneapolis next year, is a former banker, not an economist. His views on central bank policy aren’t publicly known.

But he’s been a prolific presence on social media, where he acknowledges no one fully understands the economy, defends Ben Bernanke and the bailout of AIG, and once opined the president should look beyond Janet Yellen and Larry Summers as options for Fed chief.

Interesting article. The economy is the only man made system, that I can think of, that we don’t fully understand. https://t.co/DTVz8ajFZT

Maybe Fed should just admit: “We will keep rates at zero until inflation is staring us in the face (and then we will freak out).” — Neel Kashkari (@neelkashkari) March 19, 2014

@lv_1 I think it’s better if the Fed sets mon. policy independently than trying to satisfy the whims of politicians.

On the Government Bailout of AIG

Only in America can a drunk guy drowning in a pool turn around and sue the lifeguard who saved him. Hank Greenberg should thank taxpayers. — Neel Kashkari (@neelkashkari) June 15, 2015

On the Unemployment Rate

On the Labor Market

I don’t say MUST READ often. But this is. Economist coverage of NBER paper on incentives and job market. Please read. http://t.co/3nZd2aA2Sd — Neel Kashkari (@neelkashkari) February 6, 2015

I think it is an open question whether @twitter / @facebook are net positive for global productivity. I have no such doubts about @uber.

On Who Should Be Fed Chief

I hope POTUS is casting wide net for Fed Chair. Summers/Yellen are highly qualified, but so are others who warrant consideration. — Neel Kashkari (@neelkashkari) July 31, 2013

On the State He Now Plans to Leave

This piece by @joelkotkin is spot on – and depressing. http://t.co/W3meRt4aaO

Neel Kashkari at a Glance