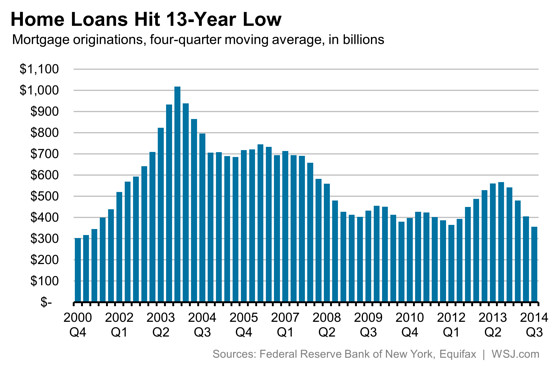 New figures released by the Federal Reserve Bank of New York on Tuesday show that mortgage lending is running at its lowest level in 13 years, with 2014 on pace to be the weakest for new loans since 2000.

Mortgage lending has been weak since the housing bust hit in 2007, but it received a series of lifts over the past few years with each round of stimulus by the Federal Reserve. Those efforts brought mortgage rates to lower levels, unleashing bursts of refinancing.

After mortgage rates jumped in the middle of last year, from around 3.6% in May to 4.6% in June for a 30-year, fixed-rate mortgage, refinancing withered. And it hasn’t returned.

For the year ended in September, mortgage lending has averaged $357 billion per quarter over the prior four quarters, the lowest since the middle of 2001. And unless the fourth quarter is unusually strong—and it usually isn’t, because housing market activity slows in the winter—that will leave 2014 as the worst year for mortgage volumes since 2000.

Most of the decline has been driven by the falloff in refinancing, and the New York Fed data doesn’t separate purchases from refinancing. Still, purchase activity hasn’t been great this year, with home purchases barely keeping up with last year’s volumes.

Is 2015 the Turnaround Year for First-Time Home Buyers?