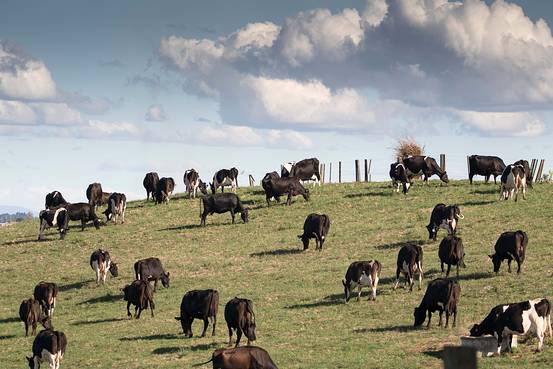 New Zealand’s central bank kept interest rates at 3.5%, but signaled a willingness to cut if necessary in what many economists interpreted as a shift toward an easing bias.

In a statement Thursday, Gov. Graeme Wheeler dropped earlier references to an anticipated “period of rate stability,” bolstering the view that the bank had changed its stance to a considerably more dovish one.

The governor pointed to lower world dairy prices and the high exchange rate as among factors weighing on the agriculture-focused country’s economic growth. The remarks echoed dovish language used by John McDermott, assistant governor of the central bank, in a speech last week.

“It would be appropriate to lower the official cash rate if demand weakens, and wage and price-setting outcomes settle at levels lower than is consistent with the inflation target,” Mr. Wheeler said.

Rates in New Zealand have remained steady since last July, making the nation something of an outlier in a region where interest rates have been coming down.

Last year, New Zealand was among the first countries in the world to begin raising rates, confident that its economy had come through the worst of the financial crisis.

Four rate increases in the first half of 2014 took the official cash rate to the current level, and put a rocket under the New Zealand dollar. Economic growth has been supported by a booming housing market in the country’s largest city, Auckland, and reconstruction following a series of devastating earthquakes in the second biggest, Christchurch.

On Thursday, Mr. Wheeler said the high Kiwi dollar, low global inflation and declines in oil prices had lowered annual inflation in the first three months of the year to just 0.1%. The central bank is required to keep inflation within a 1% to 3% target range, while aiming for near 2%.

The statement was another step toward a shift in monetary policy, said Michael Turner, an economist at RBC Capital Markets. “We are happy to call this a genuine easing bias now,” he said. Mr. Turner is expecting a rate cut in June.

Paul Dales, chief Australia and New Zealand economist at Capital Economics, said he saw it as a shift from a neutral policy bias to “an implicit loosening bias” that bolstered his firm’s view that interest rates would be cut to 3% by the end of the year. “Rate hikes are off the table,” Mr. Dales said.

ANZ Bank’s chief economist Cameron Bagrie was more cautious, arguing that the central bank’s reference to an anticipated gradual increase in inflation meant it had merely opened the door to a rate cut, not shifted its bias. “An expected pick-up in inflation is inconsistent with an outright easing bias,” Mr. Bagrie said.

The high exchange rate remains a deep concern, the central bank said Thursday, adding that it was particularly unwelcome against the backdrop of falling export prices. Global dairy prices have dropped by about 50% over the past year, as world supply has risen and China’s stockpiles have increased.

The Kiwi fell as much as 0.9% against the U.S. dollar and 0.8% versus the Aussie immediately after the central bank’s rate decision and comments.