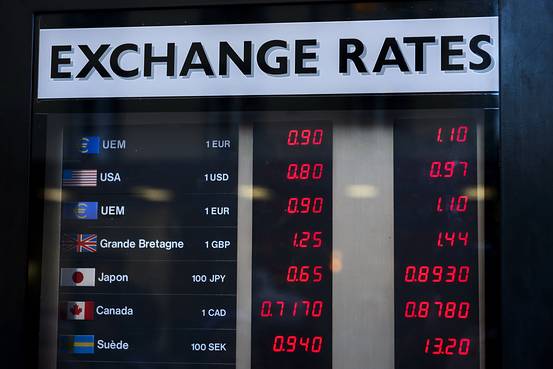 Currency rates in January. The dollar has gained ground against the euro ever since the European Central Bank announced plans in January to ease its monetary policy.
FABRICE COFFRINI/AFP/GETTY IMAGES

How the press covers currency impacts on earnings depends in large part on where the reporting is done, according to data released Thursday, which also showed news coverage of the global economy was more positive in March.

The dollar has gained ground against the euro ever since the European Central Bank announced plans in January to ease its monetary policy. Ahead of the important quarterly earnings season, Absolute Strategy Research and The Wall Street Journal looked at how changes in foreign exchange are being viewed by the press in Europe and the U.S.

A strong currency tends to dampen revenues earned overseas by multinationals. U.S.-based companies such as Tiffany and Oracle have already warned that the rising dollar will result in slower earnings growth.  On the other side of the pond, French cosmetics maker L’Oréal said in January that the weaker euro should have a positive effect on sales and profits. 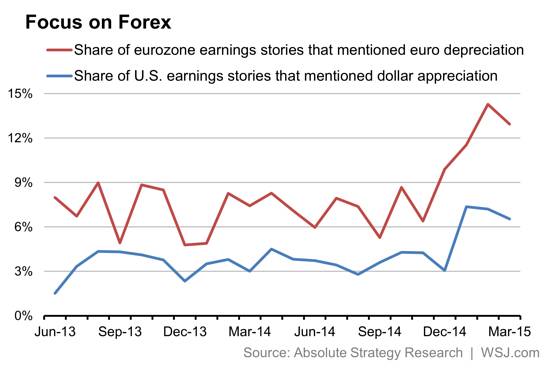 More generally, the ASR research showed more upbeat news coverage on the economy in March. The ASR/WSJ global composite newsflow index increased to 52.4 in March from 50.5 in February and 48.7 in January. The U.S. newsflow composite index increased to 55.3 last month from 53.8 in February and 50.1 in January. An index above 50 denotes positive news coverage on economic topics.

Despite the back-to-back increases, ASR analysts said the readings in the U.S. and globally were not especially strong. “The magnitude of improvement remains small. Overall ‘chatter’ points to more of a stabilization than a convincing economic upturn,” the report said.

The ASR/WSJ indexes are diffusion indexes that compare the number of positive news coverage versus the number of negative stories on an economic topic.  Absolute Research queries the Dow Jones’ Factiva database for stories that cover six topics: economic growth, analyst estimate revisions to corporate earnings, revenue/sales, employment, inflation and the perception of monetary policy.

Currency Movements Take On a Bigger Share of Economic News