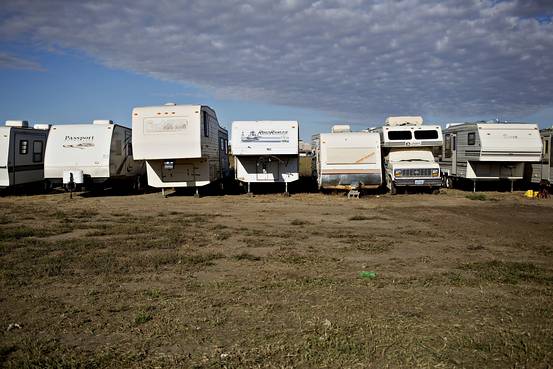 Trailers belonging to former park residents who were laid off but plan to return sit in storage at the Rakken Arrow RV Park in Watford City, N.D., in September.
DANIEL ACKER/BLOOMBERG

Unemployment in energy-rich North Dakota fell to 2.8% in September, the lowest jobless rate in the country, the Labor Department reported on Tuesday.

The fall comes after a sharp and sustained drop in oil prices had sent the unemployment rate above 3% over the summer.

Much of the decline had to do with a shrinking workforce, as pools of workers who were less attached to the labor market dropped out, such as people who were near retirement, students who may have had a part-time job, and the disabled, said Michael Ziesch, manager of the Labor Market Information Center at Job Service North Dakota.

The number of people in North Dakota’s workforce fell to a seasonally adjusted 409,883 in September, down from 416,434 in June, when the unemployment rate rose to 3.1%.

Mr. Ziesch said that firms that had been desperate for workers are now scaling back, and are no longer going out of their way for certain groups of potential employees.

“When things were really, really hot in the state, businesses were making extra special accommodation for those pools,” he said.

The western region of North Dakota, home to most of the state’s energy production, is still healthy, said Cindy Sanford, office manager at the Williston office of Job Service North Dakota. In the four years she has worked there, unemployment has never risen above 2.2%. Production jobs are still there, although drilling jobs have dried up. Still, she noted, there are many jobs outside of the energy sector, in areas like food service and retail.

“It’s not all about energy,” she said. “Energy started it, but there’s jobs building infrastructure, retail’s starting to come in, restaurants, services, everything you need to support that.”

Overall, unemployment in September fell in 37 states from August, and rose in six states. Seven states were unchanged, as was the national rate of 5.1%.

The September Jobs Report in 11 Charts

The Jobless Rate Rose in Only One State Over the Past Year: North Dakota

North Dakota’s Jobless Rate Is the Lowest No Longer