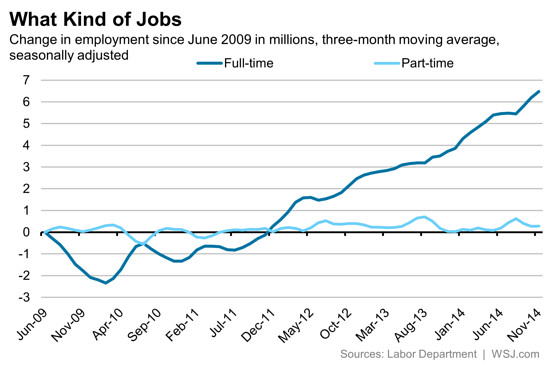 A common reaction to a string of solid job gains—such as Friday’s news that the economy has added 2.7 million jobs over the past year, which is at an eight-year high—goes something like this: Well, how many of those jobs are full-time?

The answer is most of them.

The economy has seen a net gain of more than 6 million full-time jobs since the official end date of the 2007-09 recession, which was in June 2009. The economy has witnessed a net increase of just 311,000 part-time jobs over the same period, according to Labor Department figures.

Looking back over the last year tells a similar story. There were 2.5 million more full-time workers in November than one year ago, compared with around 309,000 more part-time workers.

Friday’s survey did show that the number of full-time workers ticked down in November from October, but that survey tends to be volatile from month to month. Over the past three months, there are 866,000 more full-time workers, compared with 27,000 more part-time workers.

It’s true that during the recession and in the first few years after it ended, employers added many more part-time workers than full-time workers. That hasn’t been the case for about three years.

The cynicism over the jobs numbers is understandable for other reasons. As my colleague Damian Paletta notes, wages have barely been growing, so the economic recovery doesn’t feel like it to anyone who’s not in the top tier of income earners.

Moreover, the recession was so severe that it has taken a long time to dig out. Even though the economy has added what sounds like a lot of full-time jobs over the past year, the number of full-time workers in November was still around 2 million shy of the high reached seven years ago. My colleague Josh Zumbrun notes that the strength of the current labor-market recovery is much weaker than those in post-World War II America.

The headline numbers don’t say anything about the quality of full-time jobs being created, either. Jobs in the services sector have grown much faster, for example, than in manufacturing, which remains well below its prerecession level. Federal government hiring is also lower. 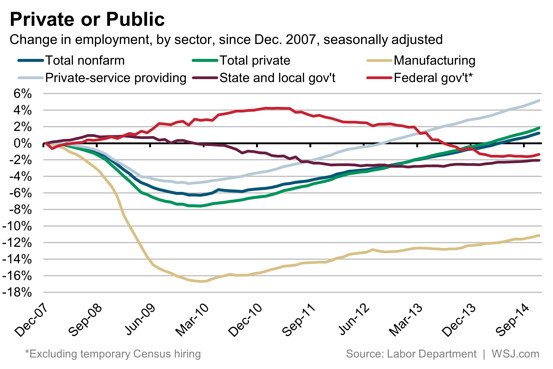 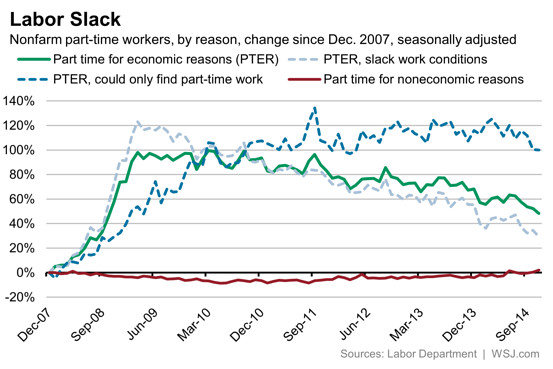 A growing majority of those workers now say they’re working part time because they can’t find full-time work, and not because of slack business conditions, which has raised questions over whether employers in some sectors—such as retail —have changed their hiring preferences. Meantime, the number of workers who are part time by choice has increased by around 1 million.

But it simply isn’t true to say that hiring is up only on the account of part-time work.

Economists React to the November Jobs Report: ‘A Blockbuster’

5 Takeaways From the November Jobs Report

The November Jobs Report: The Numbers

The November Jobs Report in 10 Charts

Where This Jobs Boom Ranks Among Recoveries

Are Wages Finally Snapping Back?

What Will Lift Americans’ Wages? CEOs Weigh In

Live Blog: Everything You Need to Know About the November Jobs Report