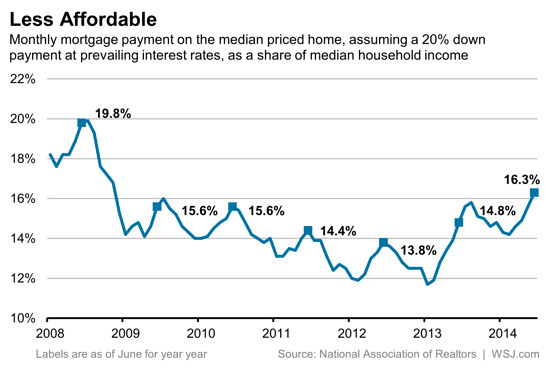 16.3%: The mortgage payment for a median-priced U.S. home in June as a share of median household income

Housing affordability hit its lowest level in nearly six years in June as home prices continued to climb, according to a report this past week from the National Association Realtors.

The Realtors’ group produces a simple measure of affordability that takes a typical mortgage payment for the median priced home and compares it to median household incomes. In June, the average mortgage payment represented 16.3% of household income, which was the highest since 2008. Excluding the last six years, it is lower than any time since at least 1989.

Since most Americans take out a mortgage to buy a home, affordability is a function of both prices and interest rates. Home prices have rebounded sharply over the past three years amid a decline in the supply of homes being offered for sale, particularly at the low end of the market. The median home price of $223,300 in June was the highest August 2007. Mortgage rates averaged 4.2% in June, up from 3.7% one year earlier.

The drop in affordability helps explain why housing demand has been weaker so far this year. Job growth has picked up, but incomes aren’t rising briskly, even as prices have rebounded strongly. Sales of new and previously owned homes are running around 5% below last year’s levels.

A few caveats on the Realtors’ index—or any such affordability index. First, it makes certain assumptions that may not be realistic for all borrowers, particularly those at the margins. The NAR index, for example, assumes that borrowers are making a 20% down payment. This shows why, despite what would appear to be great affordability, many renters may not be buying homes: They don’t have a 20% down payment.

True, there are lots of options for borrowers with less than a 20% down payment, including loans backed by the Federal Housing Administration, which allows borrowers to put down just 3.5%. But loans with less than 20% down are more expensive, too. They require the borrower to pay for mortgage insurance, which can add hundreds of dollars to the monthly payment.

Borrowers also have to take on more debt to buy the same home as someone making a bigger down payment. Both of these obviously makes homes less affordable.