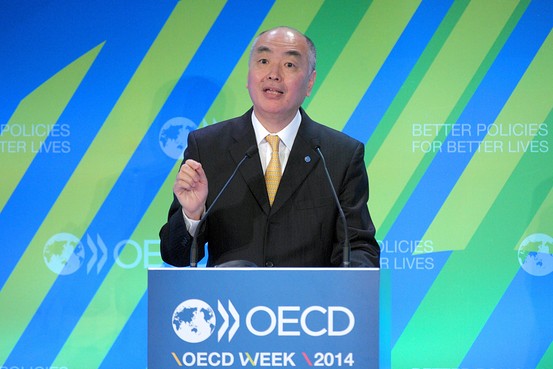 Arriving from Paris recently, Rintaro Tamaki couldn’t help but notice the difference in the public debate between Japan and Europe. The chief economist of the Organization for Economic Cooperation and Development observed that in Japan, the discussion is all about strengthening growth, while in Europe, it is about reducing inequality.

As a testament to this, the international best-seller on rising global inequality, “Capital in the Twenty-First Century,” by French economist Thomas Piketty, isn’t even available in Japanese. First published in French last year, the English-language version shot up the U.S. charts after it came out in the spring.

The lack of debate on inequality in Japan is especially significant in light of widening income gaps under Prime Minister Shinzo Abe’s policies to stoke inflation, said Mr. Tamaki, who is also deputy secretary-general of the OECD and a former of Japanese vice finance minister. He was in Tokyo to present the organization’s report, “Policy Challenges for the Next 50 Years,” which warns about growing income disparity among the OECD’s 34 member states.

Widening income gaps could have other, potentially more serious consequences, he said. In Europe, such disparities have played a part in the rise of far-right parties – which Mr. Abe may need to tread carefully to avoid, Mr. Tamaki said.

“Why are Japanese so indifferent to the issue of income inequality?” he asks.

He notes at Mr. Abe’s request, large Japanese unionized firms have raised wages, partly out of concern for their reputations, but small, non-unionized ones with little such concern have kept wages down. The result has been a widening income gap between large and small firms.

Moreover, the recent weakening of the yen is also devaluing wages.

“The cheaper yen allows exporters to earn more revenue in yen for the same dollar-amount of sales, while keeping labor costs constant,” he said. “The weak yen simply brings down the share of wages in sales.”

The weaker yen has been part of the Bank of Japan ‘s formula to stoke inflation expectations. The weaker has raised the prices of a broad range of imported items, from food to fuel. Mr. Abe wants to generate inflation to spur firms to invest and take risks, rather than just sitting on piles of cash.

Recent economic data back Mr. Tamaki’s observation that real wages in Japan are suffering, declining 3.6% on year in May, the biggest decline since December 2009.

An increase in the sales tax to 8% from 5% on April 1 has been partly to blame for the sharp drop in consumer purchasing power, but inflation has played a role.

Rising inflation not only lowers consumers’ purchasing power, but eventually raises mortgage rates and erodes the value of personal savings.

He stressed that the way to attract investment and create jobs is through more aggressive deregulation.

“Now, people will have to think about their skills and how they can win wage increases,” Mr. Tamaki said. “Japan has become a more normal economy.”