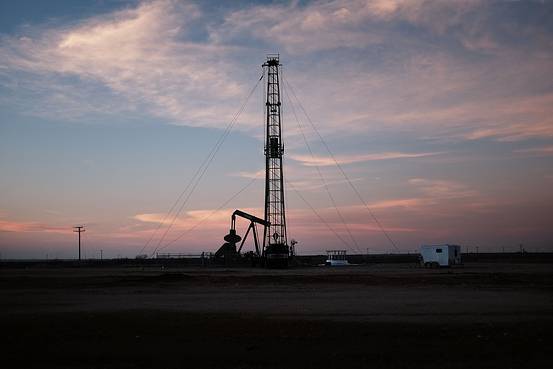 After a plunge in oil prices, communities dependent on oil revenue are preparing for hard times. Texas, which benefited from hydraulic fracturing and the shale-drilling revolution, tripled its production of oil in the last five years. Across the state drilling budgets are being slashed and companies are notifying workers of upcoming layoffs.
Spencer Platt/Getty Images

While the U.S. economy continued to add jobs last month, states that rely heavily on the oil industry experienced significant cuts. Job losses hit particularly hard in Texas (down 25,400 jobs) and Oklahoma (down 12,900), leading the nation in losses. North Dakota lost 3,000 jobs, a significant cut in such a small state.

The decline in oil prices has provided a windfall for consumers who are paying less at the pump. But the plunge is now hurting the states that had benefited from the domestic oil-production boom in recent years. All told, 31 states and Washington, D.C., saw a drop in employment in March, and only 18 states saw employment rising. The broad deterioration was a reversal from February, a month in which only 13 states saw decreases and 36 states and D.C. saw an increase.

Michael Feroli, the chief U.S. economist for J.P. Morgan Chase , said Monday that the scale of job losses in Texas is so large that the state may be in recession.

Among states with job growth, California led the pack by adding 39,800 jobs. Florida added 30,600. Massachusetts and Washington each added just over 10,000 jobs. These states may be benefiting the most from lower oil prices,

While oil states were among the hardest hit, significant declines were also registered in states like Arkansas, Missouri, New Mexico and West Virginia. The widespread nature of the decline suggests neither oil nor harsh winter weather are the only culprits.

Texas Could Be Headed for an Oil-Fueled Recession