The U.S. economy rebounded strongly in the second quarter and a big contribution to that growth was renewed strength from the government, especially at the state and local level. Government spending climbed by 1.6% at an annual rate, its strongest three months since the third quarter of 2012.

State and local government spending was the biggest driver, climbing 3.1% from the prior quarter, the largest such increase since 2009, according to the Department of Commerce. 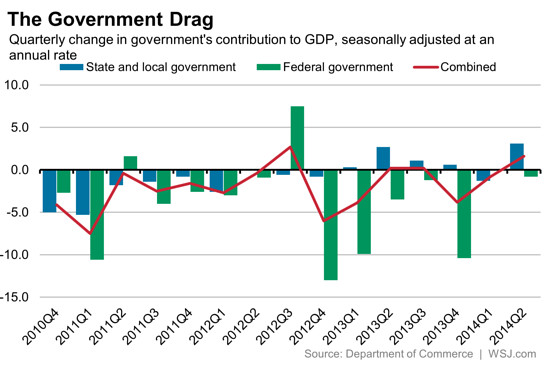 The long decline of government spending in GDP is no surprise. Since the recession, state and local governments have been forced to slash spending and raise taxes to make ends meet and the federal government has been shrinking in order to meet targets imposed in deals over the federal budget. The decline in federal spending was especially sharp in 2013 as the budget cuts known as sequestration went into effect.

Like it or not, the government comprises about one-fifth of the U.S. economy and so shrinking budgets directly translate to cuts in GDP. In recent years, what little growth the economy mustered came from the private sector.

The federal government shrank by 0.8%, a decline, but the second smallest one since the sequestration kicked in.

This report may be a sign that governments at all levels — federal, state and local — are groping toward a new balance and that most of the budget cutting that characterized recent years is now in the rear-view mirror. That could help set the stage for more stable growth in the future.

Hilsenrath: Modest Growth Beneath the Surface Keeps Fed on Track