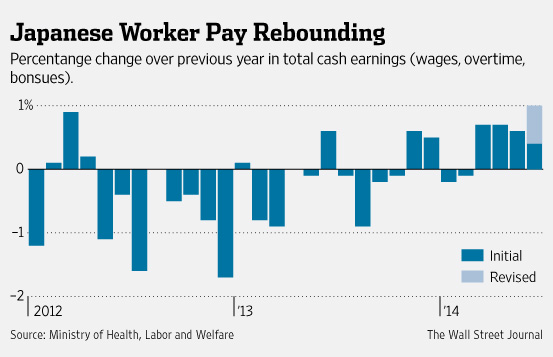 Is Japan’s economic revival experiment still on track? One crucial gauge: whether worker pay is rising.  Fresh, little-noticed data out this week makes the picture look a bit brighter.

Revised numbers now show employee earnings rose in June for the fourth straight month, the longest such streak since 2010 — and at the fastest pace in four years.

Here’s why it matters. Bank of Japan Gov. Haruhiko Kuroda likes to talk of a self-sustaining, self-reinforcing “virtuous cycle” of faster growth lifting corporate production, profits, and prices, in turn feeding higher worker pay and spending. That’s supposed to replace the vicious cycle of deflation — falling prices, falling wages, falling spending — that gripped Japan for more than a decade before Mr. Kuroda unleashed his massive stimulus program just over a year ago.

BOJ forecasts — generally more optimistic than those by private economists — rest heavily on a rosy view of the labor market. Falling unemployment is supposed to trigger higher pay as desperate employers confront labor shortages. Higher wages are meant to sustain household spending, offsetting a recent sales-tax hike aimed at curbing the government’s swollen debt. They’re also supposed to push companies to raise prices and lift inflation toward the central bank target, even as other factors that have fueled inflation over the past year (mainly a weaker yen making imports more costly) wear off.

After a few months of encouraging numbers, the vicious-to-virtuous transition has been tested this summer by the tax increase.  Even the optimists expected a bit of a soft patch. The question was whether the labor market could show enough resilience to keep the recovery going. Thus, the close attention to wage data.

When the labor ministry first released June pay data July 31, it appeared to show a deceleration in previously positive trends. Total cash earnings — wages, plus overtime and bonuses — rose just 0.4% over the previous year, a slowdown from 0.6% reported for May and the 0.7% for the previous two months.

But in the revised data released Monday, total pay rose 1.0%, the best monthly gain since July 2010. Other figures improved as well. Bonuses rose 2% versus an original estimate of 0.3%. Overtime was up 3.1%, compared with the original report of 1.9%.

One dour note: “Real pay” — adjusted for inflation and the higher sales tax — fell 3.2%. Pessimists say that means that, despite bigger paychecks, workers will still feel less well off, and spend less. Optimists say the momentum is on track for real raises soon — and the drop wasn’t as bad as the initial calculation, a 3.8% decline.