Poland and Ukraine: A boost for Donald Tusk 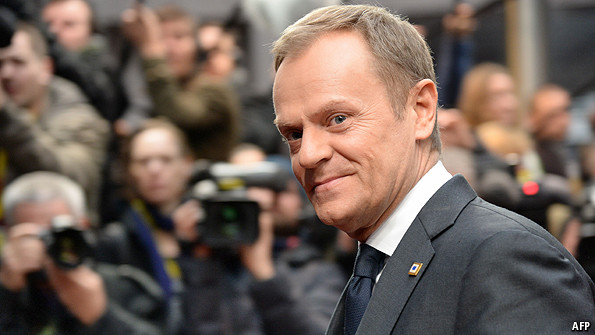 DONALD TUSK, Poland’s prime minister since 2007, never seemed like much of a military man. But since Russia’s annexation of Crimea he has focused increasingly on security, calling for a bigger presence of NATO troops in Poland, which celebrated 15 years in the alliance in March. He has urged Germany to reduce its dependence on Russian gas and wants to set up a European energy union to. The latest polls put Mr Tusk’s Civic Platform just ahead of the conservative Law and Justice party, which it had been trailing behind for months. Most observers are attributing the prime minister’s boost to the crisis in Ukraine.

Poland is in middle of the campaign for the European Parliament elections on May 25th, which are being treated as a rehearsal for Poland’s own elections next year. The Civic Platform and Law and Justice parties are in fierce competition again, following a short-lived truce in response to the rising violence in Kiev. Mr Tusk has called these European elections the most important in history. “Someone said that these elections are not about whether our schools are ready to welcome six-year-olds on September 1st,” he said. “They could be about whether children in Poland will go to school on September 1st at all.” Security has become the leitmotif of his party’s campaign; its first video features F-16 fighter plans and shows Mr Tusk alongside Angela Merkel and Barack Obama, emphasising his links to powerful foreign allies.

Jarosław Kaczyński’s Law and Justice has accused Mr Tusk of trying to scare Poles and using Ukraine to win votes. It has tried to shift the campaign back to domestic issues, on which it can criticise the government more easily, and returned to the theme of the Smolensk air crash, which killed Mr Kaczyński’s twin brother, Lech Kaczyński, who was Poland’s president at the time. (The fourth anniversary was this Thursday.)

But the conversation keeps returning to security, where Mr Kaczyński has fared less well. His remark last week that he did not wish to have German NATO troops stationed in Poland bore echoes of the twins’ embarrassing anti-German antics when they were in power. On Saturday he added that Poland needs a strong army “so that an attack on Poland would mean a real war, not some sort of intervention.”

As the situation to Poland’s east remains unpredictable, this tune—which benefits Mr Tusk’s party—could continue until election day. Polish politicians have been talking about Ukraine non-stop, but what is really on their minds is who holds the reins in Warsaw.