Poland’s women: Sisters Are Doin’ It for Themselves 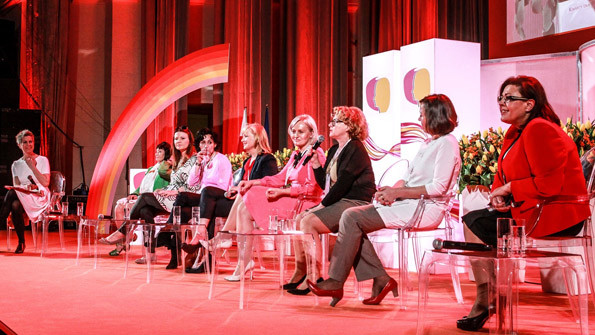 “FRIEND, sister, mother – Polish woman lift up your head,” begins the anthem of the Congress of Women, organised for the sixth year by the social movement of the same name. On May 9th and 10th feminist activists, politicians and several thousand guests gathered in Warsaw to discuss issues ranging from the 10th anniversary of Poland’s membership in the European Union to motherhood. In an effort to appeal to female voters and with just two weeks to go before the elections to the European Parliament, Donald Tusk, the prime minister, made an appearance.

One of the big themes unde discussion was gender, a word that seems to send a shiver down the spine of many a Polish conservative for whom it has become a catch-all term for all sorts of depravity. The Jagiellonian University in Kraków, Poland’s oldest university, recently changed its mind about awarding José Manuel Barroso, the president of the European Commission, an honorary doctorate, allegedly because some of its academics see him as promoting “genderism”.

“The campaign against gender is clearly an effort of Poland’s religious right to distract attention from paedophile scandals inside the church,” says Agnieszka Graff at Warsaw University, who is a member of the Congress of Women’s programme board. “It also prevents real debate about women’s issues from taking place.”

The presence of Mr Tusk at the congress as well as several senior women from his Civic Platform party gave parts of it a rather political feel. (Some observers have even accused this year’s congress of cosying up to the governing party.) The Congress of Women is not a political party, according to its organisers, though it is backing over 40 women from various parties who are running on at the European elections May 25th. Danuta Hübner, for instance, Poland’s first-ever European Commissioner, is prime minister in the Congress’s “shadow cabinet” of women, which calls itself a “constructive proposition, rather than opposition” to the actual government. She is also heading Civic Platform’s electoral list in Warsaw.

Speaking on the stage lit up a warm shade of pink, Mr Tusk praised the congress, calling it one of Poland’s most effective lobbies. “The wave triggered a few years ago keeps rising and I feel that it could wash away certain politicians,” he said. He also pointed to the so-called zipper system in the works in parliament, which would require male and female candidates to appear alternately on party lists.

Yet many participants felt that the government could do more. “Tusk pays lip service to equality – he talks the talk, courts the support of the women’s congress, but very little else follows,” says Ms Graff, whose latest book focuses on Polish mothers and their sense of entrapment. “Most of his policies are deeply conservative.”