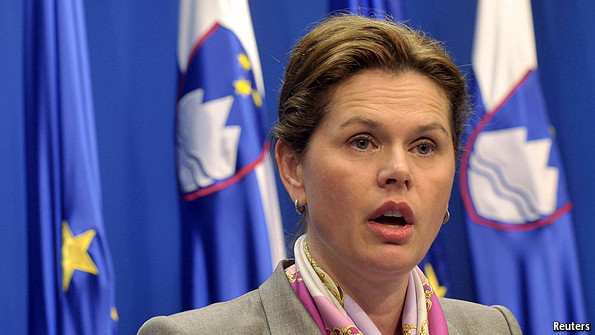 A week that began amid political instability in Slovenia will end on a higher note for the government. Alenka Bratusek, the country’s prime minister and the leader of a centre-left coalition, lost a race to stay on as leader of her own party on April 26th. In the aftermath she said she planned to resign, but recent signs point to the government staying on until early elections in the fall—significant for stability in the coming months as the country tries to dig itself out of the deep fiscal crisis that only peaked late last year.

After Slovenia narrowly avoided an IMF bailout at the end of 2013, Ms Bratusek embarked on a campaign to recapitalise the country’s troubled banking sector by injecting €3,2 billion ($4,4 billion) and getting rid of bad debt. Slovenia was among the last of eurozone members to begin cleaning up its banks. The state is now in the process of selling off a significant number of assets to cover the bill for bailing out the banks. This is a sea change in a country where some estimate that state-owned assets account for up to 60% of GDP.

The political uncertainty is not fully resolved and Ms Bratusek may yet step down in favour of somebody else in her party. Still, the drama has done little to derail the country’s plans to privatise assets. Slovenia’s borrowing costs spiked as the week began, but quickly recovered—perhaps over the realisation that government already has borrowed enough to cover spending through March 2015. “There was an overreaction,” said Matej Rigelnik, a private banker with Nova Ljubjanska Banka. “The picture is clearer now.”

Economically and fiscally, things are looking up compared to just a few months ago. The ratings agency Fitch revised its outlook from “Negative” to “Stable” on May 2nd. In doing so it noted that “the economy is recovering faster than expected”. Mr Rigelnik thinks the economy may grow by 1% this year, something once thought impossible.

In the longer term, the near collapse of banks last year may provide the impetus for decoupling public politics and private business. One need only look at the week’s other headlines to see the trouble the far too intimate links between the two have caused in this country of 2m people. Zoran Jankovic, founder of Ms Bratusek’s Positive Slovenia party and the mayor of the capital Ljubljana, beat her in the party leadership race. He is currently under investigation for corruption (Mr Jankovic denies all wrongdoing) and Ms Bratusek’s three coalition partners say they would not stay in a government led by Mr Jankovic. The main opposition party is the conservative Slovenian Democratic Party (SDS) and on April 28th a court upheld a 22 month prison sentence for Janez Jansa, the party’s leader and a former prime minister. He was convicted last year of bribery over a 2006 arms deal.

Left with few options and with the realisation that Ms Bratusek would probably need to resign by May 5th for elections to take place this summer, Ms Bratusek and her allies are now pledging to carry on with their privatisation plan until fall. The biggest jewel in the state’s asset crown is Telekom Slovenia, valued at about €1 billion. If they manage to sell that, the government will be well on its way.

Things are looking up for the economy, says Mr Rigelnik, unless eventual elections deliver power to the ultra left. The resilience of the past week, however, indicates that Slovenia may just be past the worst of its recent tumult, at least for now.