A new Reason-Rupe poll found those between ages 18 and 29 are playing Twister when it comes to their political leanings. For example, 59% say cutting taxes would help the economy, but two-thirds of the same group say it’s the government’s responsibility to guarantee everyone access to health care.

Broadly the poll, released this week, finds millennials tend to be socially liberal but lean more conservative on fiscal issues, suggesting the age group that overwhelming supported Barack Obama in 2012 could still up for grabs politically.

The poll was conducted by the Reason Foundation, a libertarian research organization. About 2,000 young adults were surveyed online between Feb. 28 to March 11. The poll’s margin of error is plus or minus 3.4%.

The poll found 43% of young people identify themselves as Democrats, while just 23% claim to be Republicans. At the ballot box, the support grows even stronger. President Obama captured 60% of the group’s vote in 2012. And 53% said they’d support Mrs. Clinton, a Democrat, for president in 2016. That is three times the support of the closest Republican, Sen. Rand Paul of Kentucky.

Millennials are less supportive of the Democratic Party when it comes to specific issues. On hot-button topics such as privacy, taxes and immigration, more said they trusted “neither party” on the issue than backed Democrats. A larger number did support President Obama’s party on gay marriage and poverty. 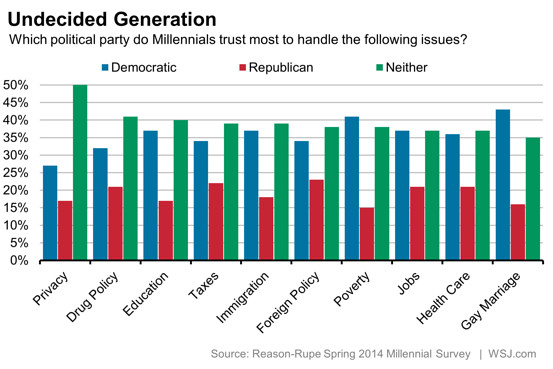 When it comes to tax policy, it appears to depend on who’s paying .More than half of the under-30 crowd supported the broad idea of cutting taxes, but 66% said raising taxes on the wealthy would help the economy.

A majority of young adults supported the idea of more government services, specifically saying they want more spending on infrastructure and programs for the poor. However, when presented with the concept that more services could coincide with higher taxes, most favored a smaller government.

A majority of the group would accept a cut Social Security benefits for seniors, if they could then invest their retirement withholdings in a private retirement account.

The poll found that 73% backed a move toward privatization of Social Security retirement accounts generally, and 52% maintain that support if it meant current beneficiaries must receive smaller payments.

Millennials likely support the major change to the entitlement program because more than half believe Social Security is unlikely to exist when they reach 67. 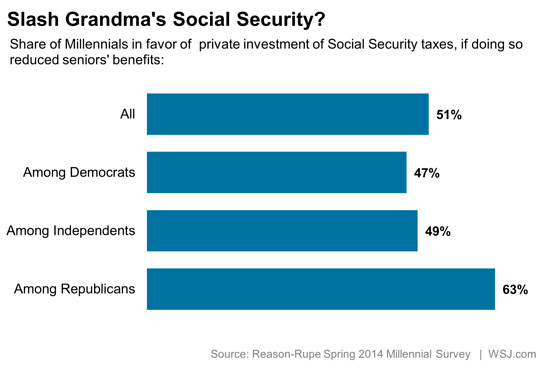 Despite a slight conservative leaning on fiscal matters, young adults are still strongly in the liberal camp on most social issues. They believe marijuana, abortion and food trucks should be legal. That runs slightly counter to another recent poll that showed younger people are more supportive of regulation than older Americans.

The Reason-Rupe poll found millennials favor the sale of large, sugary sodas and are seemingly as unsure about BitCoin virtual currency as the rest of us. 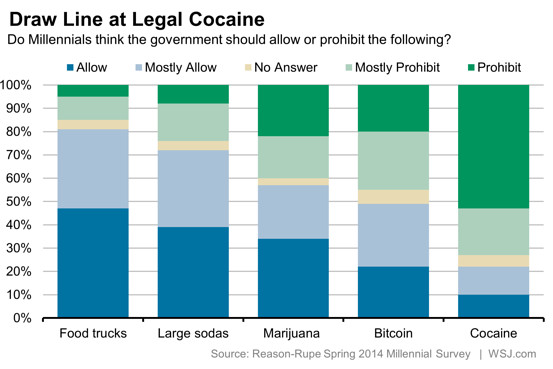