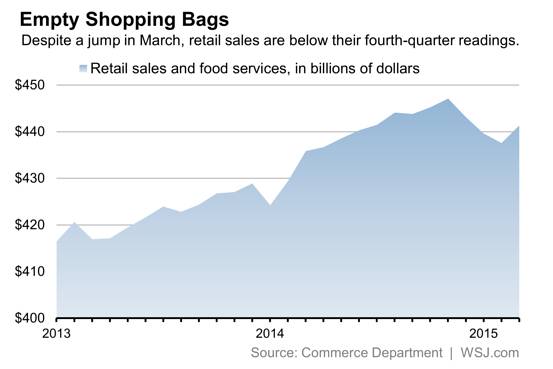 U.S. consumers have long been viewed as the shoppers of the world, buying goods made both domestically and overseas. The Great Recession seems to have changed this “shop ’til you drop” dynamic. Saving, not shopping, is the hallmark of this expansion. That’s a bad thing for producers, but not necessarily bad for the U.S. economy in the long run.

The latest piece of evidence was a gain in March retail sales that failed to beat expectations. After accounting for price changes and assuming a steady rise in services, real consumer spending probably grew at an annual rate of less than 2% in the first quarter, which would be the weakest showing in a year.

The years right after the last recession were called the New Normal, a time of financial sluggishness, reduced economic growth and lowered consumer aspirations. The New Normal, however, wasn’t expected to last almost six years into this upturn. Yet recent consumer data suggest households remain very focused on building a financial cushion to guard against the next crisis. To do that, they are being very cautious about their purchases.

The budget challenges may be worse for those 30 years and younger. That’s the generation who should be powering the economy by starting new households, buying homes and purchasing new items to furnish them. That isn’t happening, in part because of other demands on their incomes.

On Tuesday, Wall Street Journal writer Anne Tergesen wrote 25 years may be the right age to start funding one’s retirement account. That means many young adults are faced with paying off student loans, budgeting for high rents, maybe saving a down payment to buy a home, and also saving for retirement. That doesn’t leave much left over for shopping.

The long-run demographics of the U.S. mean greater household savings is a good thing.

It is widely known that the average U.S. household does not have enough saved for retirement. Socking more away will help, if only a little, to change what some fear is a future of an impoverished elder class demanding more government services.

For global producers who have long depended on the American consumer, however, the frugality means a re-think about strategy. Emerging middle classes in developing economies may be the best hope for consumer-related manufacturers. For most U.S. consumers, the New Normal means a new restraint on shopping.