Prices May be Falling, but Taiwan’s Shoppers Are Spending – Real Time Economics 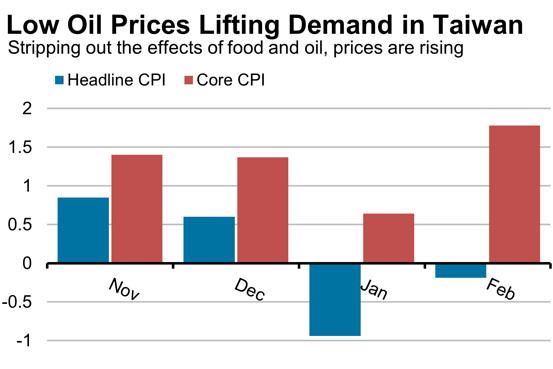 TAIPEI—Cheaper gas is finally starting to filter through to consumers in Taiwan, where falling prices overall have overshadowed a welcome pickup in domestic demand.

Like other net oil importers, Taiwan’s fuel prices have fallen more than a quarter from a year earlier. That’s put headline inflation in negative territory for the second consecutive month in February, falling to 0.19% compared with a 0.94% decline in January.

But, core inflation, which excludes food and energy prices, climbed 1.8% last month, up from 0.6% in January.

The good news is that February’s drop in consumer prices isn’t because demand is weak, but rather that oil prices are falling, says Joshua Gau, a budget official.

Both the government and economists say that despite the headline number, there’s no deflationary concern for now. If anything, the oil swoon, on the whole, could be good for Taiwan.

“It’s like a subsidy from net oil exporters. Taiwanese consumers will also be able to spend more on other goods because of cheaper oils,” said Standard Chartered senior economist Tony Phoo.

Shoppers around the world have started to do just that. U.S. retail sales rose 3.8% on year in the three months to January. Eurozone retail sales posted a better-than-expected 3.7% growth on year in January, the fastest surge in 10 years and nearly twice as quickly as analysts expected.

Stronger appetite abroad for Taiwan’s exports is translating into salary rises and better employment. Taiwan’s jobless rate fell to a 14-year low to 3.71% in January and average wages last year rose to a record high.

Taiwan’s government already factored in the boost from lower oil costs in its economic growth estimate. Last month, the government raised its forecast for private consumption growth this year to 3.12% from 2.74% previously estimated. The government also raised its growth target to 3.78% this year, the fastest pace in three years, from an initial estimate of 3.50%. 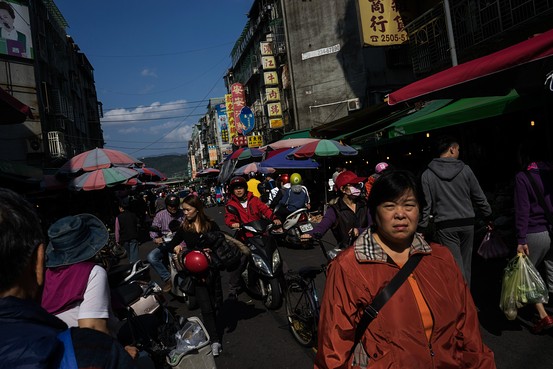 Domestic demand is starting to pick up in Taiwan on the back of lower oil prices. Here, pedestrians walk past market stalls in Taipei.
Bloomberg News