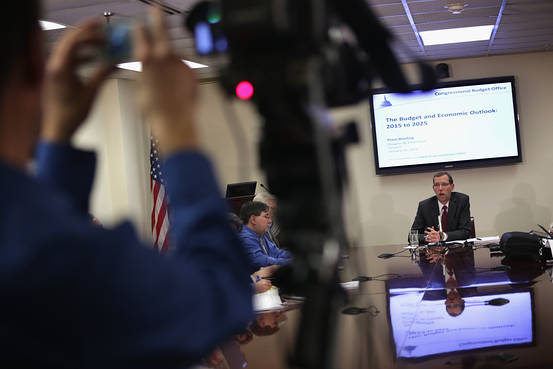 The Congressional Budget Office under outgoing director Doug Elmendorf laid out most of its assumptions behind dynamic scoring.
Getty Images

Dynamic scoring is great in theory. Can it work in practice? That’s the question facing lawmakers as they get around to hammering out a budget this year. Under a new rule in the House of Representatives, major new spending and tax bills must be dynamically scored–that is, evaluated for both their direct effect on the budget, and any indirect effect on economic growth that feeds back to the budget.

Several readers challenged my assertion last week that dynamic scoring, if done right, “would be an invaluable addition to the policy tool kit….The result should be better information for policy makers. How they use that information is up to them.” Some readers disagreed, either on the premises of dynamic scoring, or whether it could be implemented in a practical, honest way.

Below are some of the questions readers raised, with a few edits of my own, and my response.

A: No doubt Republicans want dynamic scoring because they think it will make tax cuts look better. Democrats oppose it for much the same reason. But the fact that a particular economic tool flatters one party’s preferences is not a reason to reject it; the test should be if the tool improves the information upon which both politicians and the public have to base their decisions.

Dynamic scoring probably will make lower tax rates (if they don’t raise the deficit) look better for growth because theory and evidence says they should cause people to work and invest more. Under dynamic scoring, some means-tested transfers such as food stamps will look worse for growth because they discourage work. But tax rate cuts usually benefit the rich, while means-tested transfers benefit the poor. So dynamic scoring will tend to crystallize the tradeoff so often at the heart of fiscal policy: policies that are good for growth often increase inequality, and policies that redress inequality are often bad for growth.

Deciding the tradeoff between these two things is a job for politicians, not economists.

Dynamic scoring can also distinguish between tax cuts which are good for growth and those which are not. For example, allowing business to expense capital spending rather than write it off slowly over time will have positive growth effects. But letting them temporarily repatriate profits without paying the full American tax on them will do nothing for growth and discourage them from paying the full tax on such profits in the future, adding to the deficit.

One way to provide lawmakers with a more complete picture would be for the CBO to provide an analysis of who benefits from tax cuts by income group along with its dynamic score; this would make the tradeoff, if one exists, more explicit.

Q: How are CBO and JCT supposed to decide what models are reasonable? I’ve spent most of my professional life around models and I know what I find reasonable, but there’s no consensus among my fellow economists on what’s reasonable, any more than they agree on how to estimate the impact of spending or the negative effects of government debt.

A: It’s true economists don’t agree on a single number for how people will respond to a change in taxes or transfers, but the same is true for countless estimates the JCT and CBO make all the time. For example, when taxes are cut, transfers are increased or the deficit rises, the CBO  incorporates the dynamic effects into its baseline forecast of the economy. When the CBO calculated the effect of Barack Obama’s stimulus program growth, it looked at a wide range of “multipliers”–how much GDP each dollar of stimulus generated.

CBO and JCT don’t have to come up with a single, correct number, but the number they come up with should seem reasonable to professional economists. An economist can always pick a model that confirms his or her priors. A good example would be a tax plan by Republican senators Marco Rubio and Mike Lee to reduce and consolidate income tax rates, eliminate taxes on dividends and capital gains, and allow businesses to expense capital spending. The Tax Foundation, a committed believer in the benefits of lower taxes, dynamically scored the plan  and concluded it would dramatically raise business investment and boost GDP by 15% in 10 years. It estimated the $4 trillion-plus “static” revenue loss in the first 10 years would be more than cut in half, to $1.7 trillion, once dynamic benefits to growth are included.

But the Tax Foundation makes assumptions that neither JCT nor CBO would likely share if they scored the plan. For example, it assumes any increase in investment can be financed without putting upward pressure on the return investors demand. That’s a stretch. The U.S. is so large, a big increase in its investment is going to suck up a lot of the world’s saving, which will put upward pressure on interest rates, limiting how much investment will rise.

The Tax Foundation also assumes that the deficits resulting from the plan don’t push up interest rates because they can be easily financed from abroad. Neither the JCT nor CBO agree: Like most economists, they believe that in an economy operating at normal strength, a larger deficit pushes up interest rates, thereby “crowding out” private investment. Indeed, CBO calculates that for every dollar the deficit increases, private domestic saving falls by 15 to 50 cents. That’s why it often finds that the boost to work and investment of lower tax rates is wiped out when the resulting deficits “crowd out” investment. Finally, the Tax Foundation also assumes that when after tax income rises 1%, people work 0.3% more hours. That’s higher than the CBO’s 0.2% or the JCT’s 0.25%. 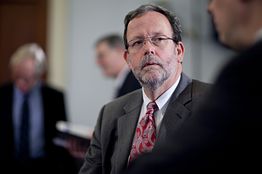 It will be up to outsiders to keep watch as Keith Hall, incoming director of the Congressional Budget Office, implements dynamic scoring.
BLOOMBERG NEWS (2011)

So while CBO and JCT can’t guarantee the models they use are the right ones, they can ensure they reflect the state of the profession’s knowledge and are not biased by political preferences. It will be up to outsiders–independent economists and the media–to monitor JCT and CBO and point out if their decisions seem at odds with orthodox economic thinking. CBO, for example under outgoing director Doug Elmendorf has laid out most of its assumptions behind dynamic scoring in background papers. If the incoming CBO director Keith Hall changes these assumptions, he should be asked why. If CBO or JCT make decisions that don’t seem reasonable, their credibility will suffer, undermining their ability to do their job.

One assumption will be particularly tricky. If a tax cut or new entitlement causes debt to rise as a share of GDP, many models require some sort of mechanism that eventually stabilizes that ratio, and the results vary considerably if that mechanism is via a tax increase or spending cut. What should CBO and JCT assume if the mechanism is not specified in the legislation? They could assume nothing is done, and allow debt to GDP to explode , along with all its negative repercussions. After all, that’s explicit in CBO’s current baseline forecast. Or they could assume that after a decade, the tax cut or spending increase will be reversed symmetrically so as to stabilize debt as a share of GDP. But I admit this is a problem with no simple answer.

Q: I’m pretty sure the House bill does not extend dynamic scoring to infrastructure spending. Doesn’t this bias the process against Democratic priorities?

A: The House rule would only apply dynamic scoring to bills with an impact that exceeds 0.25% of GDP per year, or about $45 billion. It also covers only mandatory spending such as Social Security and food stamps, not discretionary spending which goes through the annual appropriations process, such as for highways and defense. Thus, the rule would not cover most infrastructure-related bills. However, there are two caveats. First, if Democrats felt the dynamic benefits of infrastructure spending were not being recognized, the ranking member of the relevant committee could ask the CBO to estimate it (although this would not become the official score).

Second, it is not a given that infrastructure spending would generate big dynamic benefits. Federal investment comes in many shapes and sizes, from support for state and local elementary schools to federal basic research to highways and mass transit. The returns vary enormously. For example, the returns are quite high to firms that are located close to a new highway, but small for firms that aren’t. Other returns can take so long to be realized, and in such an unpredictable way, that they aren’t really measurable. The CBO concludes  that the return on federal investment is somewhere between zero and the private return on investment.

A: It’s true that tax revenue was higher at the end of Reagan’s term than at the start, but a lot more was going on besides tax cuts (such as monetary policy that produced a deep recession and long recovery).  Bill Clinton raised tax rates and tax revenue rose about as much during his term as during Reagan’s. Well designed models with plausible assumptions should help policy makers disentangle those competing effects. They generally find that lower tax rates do generate positive revenue offsets, but those offsets are far from 100%.

Macroeconomics doesn’t offer double blind trials that enable economists to say with certainty how tax revenue would have responded under two different policies. That’s not a reason to throw up their hands. Economists have theory, and small scale studies, to help them offer educated estimates. The alternative is for economists to keep their mouths shut and let the politicians say what they like, which does not serve the public well.

A: If you’re a deficit hawk, you should want dynamic scoring. The reason is that JCT’s and CBO’s dynamic scoring consistently finds that any policy that raises the deficit hurts growth by crowding out private investment. If the CBO had dynamically scored the Affordable Care Act, it would have concluded the health care subsidies discouraged some people from working. But because those people earn so little and pay so little tax, the revenue effects would have been trivial. By contrast, the deficit impact of Medicare Part D was so large, a dynamic score would have raised the bill substantially.

If my presumption is right and dynamic scoring finds only small effects, I doubt it will make or break anything of consequence. If dynamic effects yield say 15 cents in savings for every dollar of tax cuts, which would be on the high side, advocates of those cuts would still have to find 85 cents of tax increases (or spending cuts) somewhere. That’s nearly as politically unpalatable as finding 100 cents of offsets. California’s experience is instructive. It introduced dynamic scoring in 1994. But the effects it found were quite small: just 3 cents to 20 cents per dollar of tax cuts, writes Brad Williams, who worked for the Legislative Analyst’s Office at the time, on Tax Vox, the blog of the Tax Policy Center.  These effects were too small to be useful to either advocates or opponents of tax cuts, and of limited value given the uncertainty around not just dynamic scoring but garden variety static scoring. The requirement was allowed to sunset in 2000.

From this, I suspect that dynamic scoring will be neither the salvation its advocates hope, or the scourge its opponents fear. 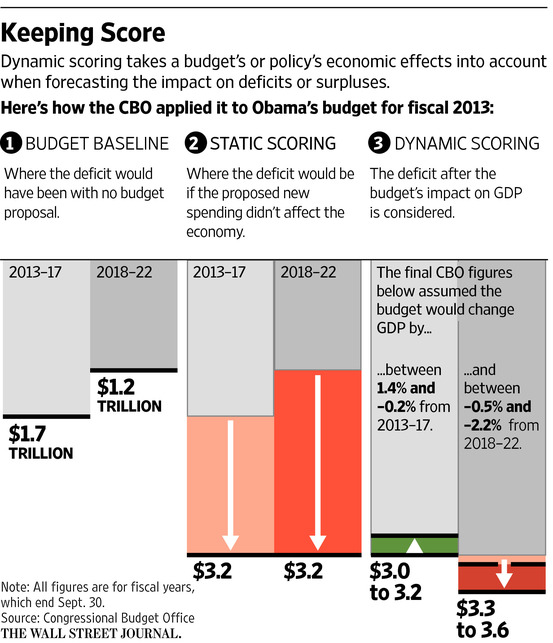