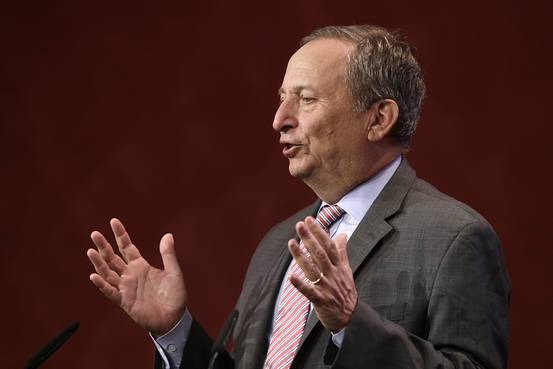 Lawrence H. “Larry” Summers, shown here at an international finance forum in Switzerland in June, has said U.S. monetary policy shouldn’t be tightened “until we’ve seen the whites of the eyes of inflation.”
Matthew Lloyd/Bloomberg News

Lawrence Summers, the Harvard University professor and former Obama administration economic adviser, hasn’t been shy of late urging the Federal Reserve to refrain from raising short-term interest rates at its policy meeting this week. In a series of opinion columns and blog posts, Mr. Summers has argued that the time isn’t ripe for a move and that markets aren’t prepared.

We caught up with him by phone while he was in London on Tuesday to ask him why he is hitting the issue so hard. Below is a transcript of the conversation.

WSJ: You have written several times now on the looming Fed decision. Most recently you said it would be an extraordinary shock to markets. Why do you feel so strongly about this issue?

SUMMERS: Obviously I’m interested in fiscal and monetary policy, and I write with more vigor and more frequency when the merits of an issue seem particularly clear to me. That has been the case with respect to infrastructure investment, and that is my judgment right now both at a strategic level in terms of what the right posture of monetary policy should be and at a tactical level, given that the market has come to expect that rates won’t be increased.

WSJ: Are you trying to be provocative?

SUMMERS: I always hope when I write columns or blog entries or do discussions that what I say will generate interest and discussion and cause people to think and rethink their positions.

WSJ: What would you do if you were running the Fed?

SUMMERS: I think I’ve made clear my views on what should be done in the near term. I’ve taken the position for some time that monetary policy should not be tightened until we’ve seen the whites of the eyes of inflation.

WSJ: A lot of people at the Fed say a quarter-percentage-point increase shouldn’t matter that much in the scheme of things, especially if the Fed moves gradually. What do you say to that?

SUMMERS: I don’t understand very well those lines of argument. If a quarter percentage point doesn’t make any difference, why does it make a difference to do a quarter percent? My judgment is that it is the wrong time to be hitting the brakes whether gently or firmly. Moreover, if there is a case for raising interest rates it is that it will have some material effect on the economy or on markets. If it won’t then it is hard to see why people would feel a compelling case to raise rates.

WSJ: You say tap on the brakes. The argument that I hear from the Fed all the time is that policy would still be extraordinarily accommodative even if they do a quarter point. They say they are not tapping on the brakes if they do this.

SUMMERS: They are surely tapping on the brakes relative to the current path of policy as it is anticipated to take place by markets. If the Fed moves, it will be the largest upward surprise movement in fed funds rate in 20 years. Perhaps that would play out as having only small consequences. But there is enough uncertainty that it does not seem a risk worth taking. Many central banks around the world have raised rates in non-inflationary conditions and been surprised by the adverse consequences and had to reverse themselves. That should be cautionary. The experience is that U.S. monetary policy has global impacts very much larger than other central banks and that initial moves have especially large impacts.

In addition, the claim that monetary policy is accommodative rests on traditional benchmarks. The whole point of the secular stagnation thesis I and others have argued over the last two years is that rates have to be much lower to provide a given quantum of support to the economy than has been the case historically. Remember, markets are saying that for the next decade real rates will average 50 basis points and inflation will be well below target.

WSJ: The unemployment rate is down to 5.1%. Are you at all concerned that we are getting near full employment and the economy might be getting close to heating up?

SUMMERS: It wouldn’t have surprised me if we had seen evidence of rising inflation by this point, and it won’t surprise me if we see evidence of rising inflation soon. On the other hand, I think it is a grave mistake to treat the Phillips curve as some kind of immutable constant, like Planck’s constant in physics. Unemployment in Nebraska is below 3% and there is no obvious accelerating inflation. Unemployment among college graduates is 2.5% and there is no obvious accelerating wage growth. Inflation stayed very well under control at the end of the 1990s even with an unemployment rate well below 5%. Many things have happened to bring deflationary pressure to our economy, so I don’t think we can be confident at all that previous estimates of the natural rate of unemployment were accurate. The econometric studies find that the estimates of the natural rate of unemployment have a confidence interval three or four percentage points wide. It is much better to look at the inflation data.

[EDITOR’S NOTE: The ‘Phillips curve’ draws a relationship between unemployment and wages. As unemployment falls and slack diminishes in labor markets, this theory holds, wages and then inflation should rise.]

WSJ: You are very good at taking the other side of an argument. What is the case for doing it?

SUMMERS: I’ve been forceful on this because most of the time with respect to questions like monetary policy the choice seems fairly balanced to me, and this is a time when the case seems less balanced. I think there was a reasonable argument, though not one I ultimately would have gone with, some months ago that raising rates would be precautionary with respect to financial stability and would not have significant adverse effects on real activity. On balance I thought the real activity costs and reduced-inflation-further-below-target costs exceeded the benefits, but I recognized how one could have a financial stability concern. After the market developments of the last several months, which according to some estimates like those of Goldman Sachs or the Fed’s own macro model have had a contractionary impact equal to two or more Fed tightenings, and at a moment of significant volatility and uncertainty, the idea that you are promoting financial stability by shocking markets seems misguided.

WSJ: Should the Fed do more stimulus right now?

SUMMERS: No. What I said a couple of weeks ago was that I thought it was possible that the Fed would find itself doing more stimulus before it did more contraction. I thought it was possible that economic and financial conditions would change in a way that would make more stimulus appropriate. The presumption that it’s a certainty that the next move would be a tightening struck me as unwarranted and that is what I was criticizing. I would not on current facts move policy in a more stimulative direction.

WSJ: How is Janet Yellen doing in her job?