Q&A: Paul Romer on ‘Mathiness’ and the State of Economics – Real Time Economics 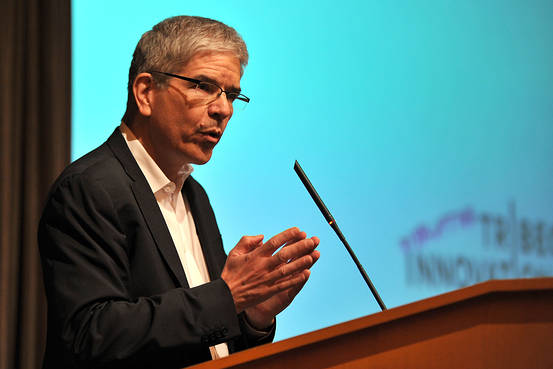 A Democratic U.S. presidential candidate has pledged to grow the economy by spending hundreds of billions of dollars on college education and eliminating tax deductions for the wealthy. A Republican promises to bring the growth rate to 4% a year by cutting taxes and reducing government regulations. How do we know what might work?

For all of its importance, economists still disagree on what policies and measures are sure to bring economic growth. Those on the left often argue for more government investment and spending to stimulate the economy. Those on the right often advocate for less regulation and lower taxes. Adding to the confusion, says Paul Romer,  an economics professor at New York University and an influential growth theorist, is the current polarized political climate, which he believes is seeping into the economics profession.

Earlier this year, he re-entered the intellectual fray with a paper arguing that the rise of what he calls “mathiness,” the use of mathematics to persuade or mislead rather than to clarify, was obstructing progress in our understanding of the factors and inputs that can lead to economic growth. Mathiness has hindered our ability to answer questions such as, What is the value of an idea? Or, How do we mathematically model the so-called “scale effects” that occur when a large network of people uses a similar product, such as mobile phones?

In his paper, “Mathiness in the Theory of Economic Growth,” he described how “mathiness uses a mixture of words and symbols, but instead of making tight links, it leaves ample room for slippage.” If this sloppiness or even intellectual dishonesty continues, he warns, mathematical models will lose their explanatory and descriptive power.  Instead, he writes, “Presenting a model is like doing a card trick. Everybody knows there will be some sleight of hand.”

He spoke to Real Time Economics about the rise of mathiness, its impact on the study of economics, and what it means for the people who rely on academics to help inform the policies that shape our lives.

Q: Comedian Stephen Colbert gave us the idea of “truthiness.” How did you come up with “mathiness”?

A: I started preparing a paper for a panel celebrating the 25th anniversary of growth theory organized at the American Economic Association annual meetings [in January 2015]. I realized that we just hadn’t made any progress, so it’s not really honest to step back and congratulate ourselves on how wonderful a job we’ve done. We really should admit there’s something wrong; there’s no movement. What struck me was how little progress we had made on the important questions about the economics of ideas.

Then I started to look more carefully and ask, what other signs are there that things are not working correctly from the perspective of science? Looking carefully at the arguments that various economists had made, it seemed clear to me that people were using the math in ways that were misleading and, in some ways, almost embarrassing to economists, and it was time to push that question out into public discussion.

Q: Why should people who aren’t economists care about debates within the field?

A: Because economics has direct implications for policy. [Going forward,] it’s going to be harder to protect a purely dispassionate, open-minded, scientific debate. It’s going to be harder to keep that from being colored from people’s own political views. The political coloring has always been there in economics, but as political positions have gotten more polarized in the United States, the effect in economics has gotten worse.

Q: Economists, young and old, have always constructed mathematical models that attempt to explain or forecast the economy. How do you know whether a model is “mathy” or useful? Is it getting any easier to tell with the increasing availability of big data sets?

A: Ultimately, the test of the model is its correspondence with the world. If we use certain frameworks, you can understand a much richer set of facts about the world. Growth is a difficult area to work because you’re addressing questions about the very long run, so you don’t have an abundance of data. You’re trying to invoke evidence from history over the very long run. We needed to come up with a way to think about all of these facts about the broad sweep of human history.

Math can be a very clear, concise, effective way to communicate ideas. What I saw in some of the people I was criticizing for mathiness was an almost obstinate adherence to positions, and then a use of any kind of mathematical argument that would support that position. What was missing was one of the characteristics of good science, which is to say “Well, given these new arguments, I may have been wrong before.”

Q: What kind of feedback have you received from colleagues in the profession?

A: I tried these ideas on a few people, and the reaction I basically got was “don’t make waves.” As people have had time to react, I’ve been hearing a bit more from people who appreciate me bringing these issues to the forefront. The most interesting feedback is from young economists who say that they feel that they have to be very cautious, and they don’t want to get somebody cross at them. There’s a concern by young economists that if they deviate from what’s acceptable, they’ll get in trouble. That also seemed to me to be a sign of something that is really wrong. Young people are the ones who often come in and say, “You all have been thinking about this the wrong way, here’s a better way to think about it.”

Q: Are there any areas where research or refinements in methodology have brought us closer to understanding the economy?

A: There was an interesting [2013] Nobel prize in [economics], where they gave the prize to people who generally came to very different conclusions about how financial markets work. Gene Fama at University of Chicago got it for the efficient markets hypothesis. Robert Shiller from Yale got it for this view that these markets are not efficient and subject to too much noise. Lars Peter Hansen was an intermediate figure who had done more econometrics.

It was striking because usually when you give a prize, it’s because in the sciences, you’ve converged to a consensus. And it was kind of a prize to economics saying, “You know, you can’t really agree what’s going on in asset markets, but we’ll give a prize anyway.”

The First Nobel Prize in Economics to Sell at Auction Just Fetched $390,848